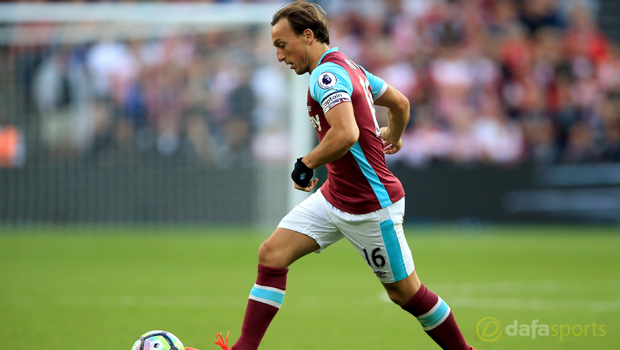 Midfielder Mark Noble has warned West Ham United not to get complacent on Saturday when they welcome rock-bottom Sunderland to the London Stadium.

West Ham endured a torrid start to their Premier League season, winning just one of the first seven matches, but they managed to get things back on track away at Crystal Palace last time out.

The Hammers clinched a narrow 1-0 victory at Selhurst Park and the result was enough to lift the club out of the bottom three into 15th position.

Slaven Bilic’s men are still only one point above the relegation zone but there appears to be a bigger confidence within the squad after ending the poor run of form.

Next up is a home clash against Sunderland, who are yet to pick up a single win this term and sit rock-bottom of the league with just two points to their name.

Scottish tactician David Moyes, who only took charge at the Stadium of Light this summer, is under huge pressure and a bad result could end his short spell.

West Ham are expected to clinch all three points on home soil but Noble has warned his team-mates to take nothing for granted against their out-of-form opponents.

“It doesn’t work like that in this league, you have to really earn your points.” The Hammers are firm 1.73

favourites to make it two wins on the spin, a draw is priced at 3.75 whilst the Black Cats are the 4.75 outsiders.