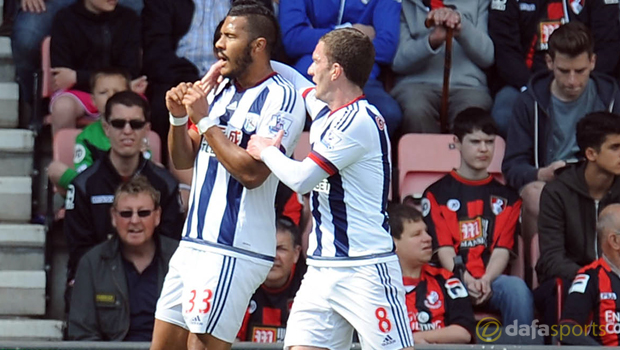 West Brom’s Salomon Rondon says he is feeling fantastic ahead of the new Premier League season and is already looking to better his goal tally from the previous campaign.

Rondon joined the Baggies last summer for a club-record fee of £12million from Zenit Saint Petersburg and he has arguably matched that sizeable price-tag after producing some strong performances.

The 26-year-old managed to score 10 goals across all competitions in his debut campaign in England and made the most out of the limited chances that came his way.

He finished the season in good form after bagging strikes in the draws against Bournemouth and Liverpool, and this momentum was taken onto the international scene.

The Venezuelan found the back of the net four times for his nation over the summer, scoring in friendlies against Costa Rica and Guatemala, before notching in games against Jamaica and Argentina at the Copa America.

Rondon is hoping to take the impressive form into the new campaign as he aims to notch up more than 10 goals this time round.

“I am fit and well and ready for the new season. I feel very good, confident and happy,” he said.

“It’s very important for me to score goals and I hope to score more this year than I did last year.”

West Brom open their new Premier League season away at FA Cup runners-up Crystal Palace on August 13 and the visitors are priced at 3.40 to pick up all three points.


The Eagles, who have signed England international Andros Townsend from Championship outfit Newcastle United amongst others this summer, are the 2.05 favourites to get off to the perfect start while a draw is also a 3.40 chance.