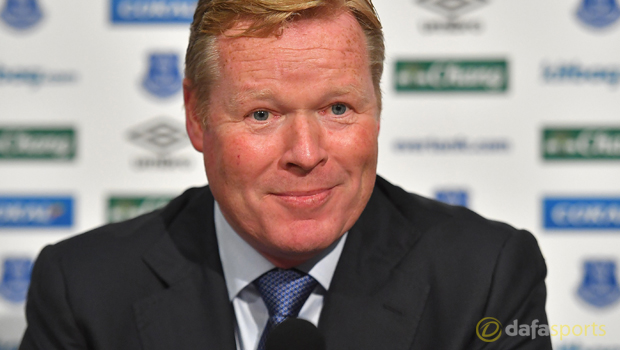 Everton manager Ronald Koeman has revealed he will look to use the Academy players in the first team squad this season as long as the youngsters are showing enough promise and potential.

Koeman left Southampton this summer to succeed Roberto Martinez at Goodison Park and many are expecting a big overhaul of the squad after a disappointing campaign.

The Toffees did manage to make it to the semi-finals in both the League and FA Cup – losing out in both competitions – but the 11th place finish in the Premier League proved to be the decisive factor in sacking the Spaniard.

American goalkeeper Tim Howard, midfielder Leon Osman, South African Steven Pienaar and long-serving defender Tony Hibbert have all been released by the club while others are being tipped to leave.

Koeman has already brought in a new shot-stopper with the addition of Dutch international Maarten Stekelenburg, who will provide competition for current number one Joel Robles.

Several more players are expected to come through the door at Everton over the summer, but there may not be as many as some of the fans believe there will be.

The former Saints boss admits the youth set-up at the club is extremely good and there will be some promotions if the younger generation prove they have what it takes to compete at the highest level.

“We have a great Academy and, okay, we can sign players but I think the best is that young players get their debut in the first team because they are working well in the Academy and you need to give them the confidence to get opportunities to play in the first team,” he told evertonfc.com.

“We know it’s all about winning but if you can do that with people from the Academy, that’s better.”

Everton open their new campaign at home to Tottenham Hotspur, who finished third last season, on August 13 with the hosts 2.80 to pick up three points, a draw is priced at 3.30 while the visitors are the 2.38 favourites.