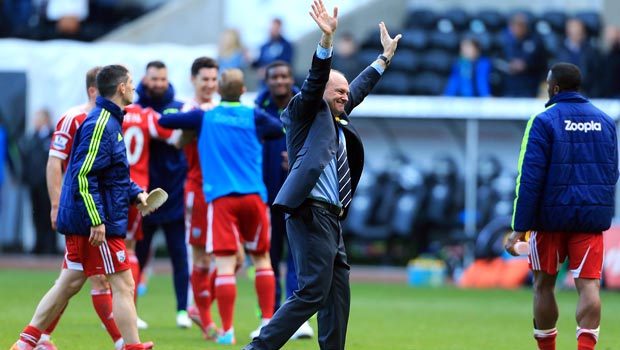 Pepe Mel says it is crucial West Brom have a strong finish to the season and he will only discuss his future when the campaign is over.

The Baggies have had a good month, culminating in the victory over West Ham at the weekend that lifted them four points clear of the drop zone, but it could have been better.

Albion squandered leads against Cardiff and Tottenham and had to settle for a point in each game, but in general results have picked up.

There is a good chance they will stay in the Premier League but the future of Mel remains up in the air and there are doubts over whether he will remain in charge even if they do stay up.

There are also a number of players who are due to fall out of contract at the end of the season and Mel says it will be a pivotal summer for the club.

“We have a meeting in the week that the season ends, and it’s then that we’ll talk,” said Mel.

“We need to sit down, the chairman and myself, and we need to look at what he wants for the future.

“It really does depend on whether it will be with me.

“There are a lot of players who are going to be out of contract, so it’s very much a case of creating a new team.

“The make-up of this team will be very important, that will define the future.

“We’ve spoken about the fact that for me the month of April was the most important, and during the month we’ve got a lot of points.

“I think the team is continually looking more similar to what we work on during the week. But we’ve still got three games to go and we need to finish as high as possible.”