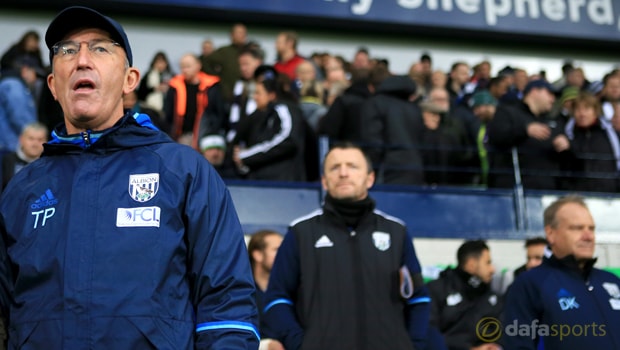 It wasn’t long ago when rumours were flying around claiming Pulis’ future at the Hawthorns was under threat after the takeover of the club was completed.

However, West Brom have enjoyed a terrific season so far and the win over the Hornets has kept the team in the hunt for a possible European finish.

Jonny Evans, Chris Brunt and Matt Phillips all got on the scoresheet in the win which saw West Brom climb to sixth, with the Baggies now unbeaten in their last four Premier League matches, winning three and drawing once.

There is still a big 10-point gap to Manchester City in fourth but the West Midlands-based club are in a terrific run of form at the moment.

Pulis has openly admitted he is seeking reinforcements in the next transfer window and believes the club will be in a strong position to bring in new recruits if they maintain their position.

“This was a massive game for us and we’ve got some real tough games, again, coming up – a real tough run of games,” he said.

“It gives us a platform going into the window and we’re looking to bring one or two players in.”

West Brom face a tough away trip to Stamford Bridge on December 11 to take on table-toppers Chelsea, who have racked up eight straight league victories.

The visitors are huge outsiders at 12.00 to take all three points, a draw is priced at 5.50 while the Blues are firm 1.22 favourites to make it nine wins on the spin.

Pulis’ men then take on Swansea, Manchester United, Arsenal and Southampton to end their 2016 schedule.