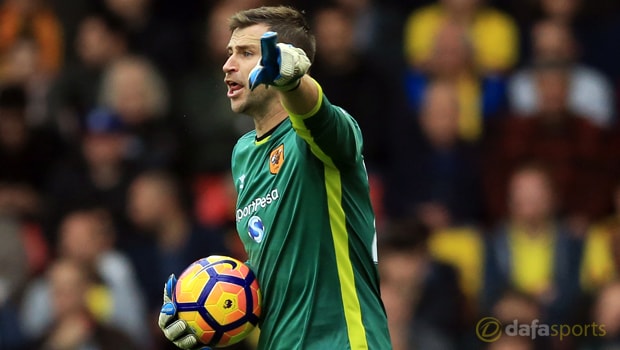 Goalkeeper David Marshall is hoping Hull City can up their performance and pick up a massive three points at fellow Premier League strugglers Middlesbrough on Monday night.

Hull have endured a disappointing season so far and, after winning their opening two Premier League games, they have only picked up one more victory from 11 outings.

The Tigers are sitting 19th in the table – two points ahead of rock-bottom Swansea City – but they could jump out of the bottom three with a win at the Riverside Stadium.

Mike Phelan’s men head into the relegation six-pointer on the back of a hard-fought EFL Cup quarter-final triumph over Championship leaders Newcastle United.

The Magpies were the better of the two teams at the KCOM Stadium, but it was the home side who managed to book their place in the last four, winning on penalties after the tie was locked at 1-1 after extra-time.

Marshall was rested for that clash but he is hoping to be recalled to the starting line-up despite Eldin Jakupovic’s heroics in the penalty shootout.

The Scotland international is looking forward to the crunch-clash with Aitor Karanka’s side, who are just a point above the relegation zone, and he is confident his side can come away with all the spoils.

“It’s one of those that’s a huge game for us. We have to go and put on a performance,” Marshall said.

“I think it was a disappointing away game at Sunderland when we lost against another team who you would expect to be down there. “But Middlesbrough have been on a reasonable run of form.

We’ve been a lot better at home recently, so we’re looking to take that confidence into the game on Monday.”

Middlesbrough are 1.80 favourites to clinch all three points, a draw is priced at 3.40, while the visitors are the 5.00 outsiders.