Wesley Sneijder: ‘We must cut out mistakes against Turkey’

Posted by Robert Morris on September 6, 2015 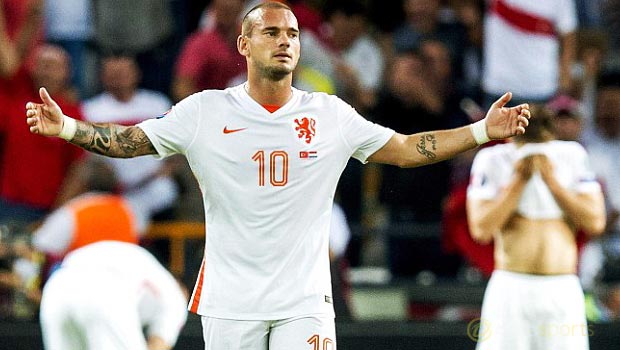 Dutch midfielder Wesley Sneijder says his team must cut out silly mistakes and be a lot sharper against Turkey on Sunday if they are going to qualify for Euro 2016 in France.

A home defeat to Iceland on Thursday leaves the Netherlands in third place in Group A, six points adrift of the Czech Republic in second and seven back from surprise leaders Iceland.

Danny Blind’s side now face a make-or-break clash with fourth placed Turkey in Konya on Sunday.

Defeat would see the hosts overtake Sneijder and his teammates, with Netherlands coach Blind admitting their sole focus is now on finishing third in the group and gaining a playoff for a place in France.

Sneijder says they must be sharper against Turkey.

“It is something (a situation) we have created ourselves. We must now stop Turkey taking the first step towards the playoffs, but it will be a hard match.

“The risks created by the kind of mistakes we made against Iceland will be much greater in Konya,” said Sneijder.

“The players and fans will do everything to make our lives difficult.
We have to be a lot, lot sharper than we were on Thursday.”

Defender Bruno Martins Indi was sent off in the first half against Iceland, leaving Sneijder and company to face a completely different game against Iceland with ten men.

The Galatasaray player was frustrated with his teammate for leaving the team exposed.

“That changed the whole game, and that cannot happen. I think we should be angry with Bruno Martins Indi.

“The stakes are so high, and such mistakes can be fatal. I think he knows that,” he added.