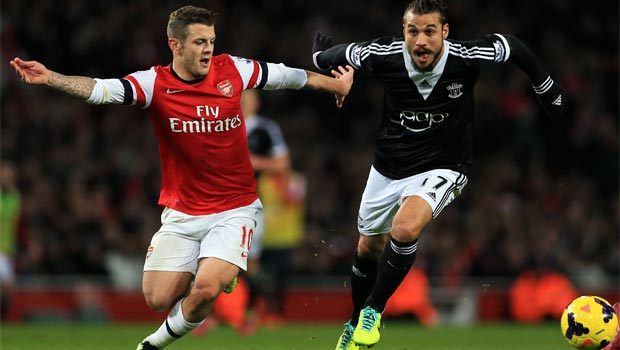 Arsenal look set to be without Jack Wilshere when they continue their push for the Premier League title at Southampton on Tuesday night.

The England international has been dogged by ankle problems over the last two years and Wenger will not be taking any risks on the player for fear of him having to spend another lengthy spell on the sidelines.

There is better news for Wenger though, as midfield duo Mikel Arteta and Aaron Ramsey, along with defender Thomas Vermaelen, are fit and ready to return to action.

“We have a doubt about Jack Wilshere, who had this ankle problem during the game against Coventry,” Wenger said.

“But we have three players back normally in the squad. The three are Vermaelen, Arteta and Ramsey.

“They should all be back and available, but we might lose Jack for tomorrow’s game.”

Arsenal are bang in form after winning five Premier League games on the bounce and are priced at 1.96 to make it six against Saints, who have lost their last two. Southampton are 3.35 to end that sequence with a win, while the draw is 3.43.

Meanwhile, reacting to the FA Cup fifth-round draw, Wenger admits his side have it all to do to make the last 16 after being paired with Liverpool.

“It’s an interesting draw and a difficult one. We have a little advantage by playing at home. That means we don’t travel,” Wenger added.

“But overall it’s a great difficulty, and we’ll try again to absorb it and to come out in a positive way.”