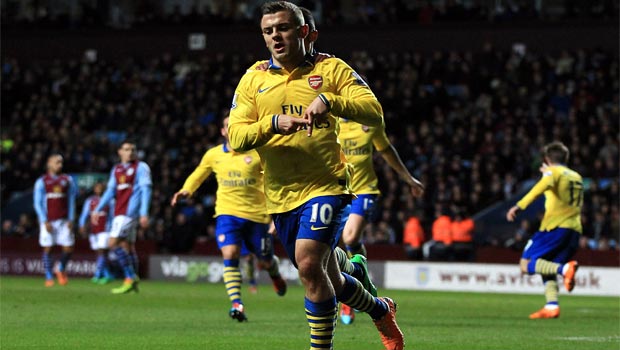 Arsene Wenger was delighted with Jack Wilshere’s form as Arsenal returned to the top of the Premier League on Monday but the Gunners boss revealed the 2-1 win over Aston Villa came at a price.

Czech Republic international Rosicky suffered a suspected broken nose after a clash with Villa’s Gabriel Agbonlahor while Monreal went off with a foot injury amid fears that it could be a broken metatarsal.

Rosicky, who came on as a second-half substitute for Serge Gnabry, was caught by a stray elbow from Agbonlahor as the pair went up for a header.
Wenger said Rosicky has “a bad nose. We don’t know if it’s broken.”

He added: “Honestly I didn’t see the elbow, I have to watch it again. He [Rosicky] told me that he got the elbow but he himself doesn’t know if he did it on purpose. He doesn’t know.”

The Arsenal boss was full of praise for Wilshere, who scored the first and set up the second for Olivier Giroud within 30 seconds of Aston Villa restarting the match.

Wenger said: “He has found his change of pace back, his game about that and his penetration because he’s not only a passer but he’s guy who is incisive with the ball. It’s his strengths so from that you need to be at the top of your game physically.”

Arsenal’s win puts them back above title rivals Manchester City, the 2.05 favourites to win the Premier League, and Chelsea, 3.90, on a weekend when the top seven in the table all picked up three points.

“We had to give a strong response because everybody looks at you and see if you drop points because they have made their points over the weekend,” added Wenger.

“You know that you’re not allowed to drop any points but you can only give one answer and that is to win the game.”

Chelsea will feel the pressure of playing last next weekend as they entertain champions Manchester United on Sunday – 24 hours after Arsenal’s home match against Fulham and Cardiff City’s trip to face Manchester City.