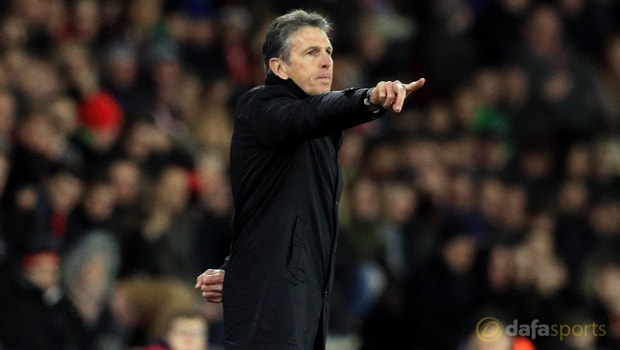 Claude Puel is not getting carried away after Southampton defeated Liverpool in their EFL Cup semi-final first-leg clash at St Mary’s.

Puel’s side earned a deserved win, courtesy of Nathan Redmond’s first-half goal, but their manager conceded afterwards that Saints should be taking a more significant lead to Anfield for the second leg.

Reds goalkeeper Loris Karius thwarted Saints time and again, denying Redmond the chance to grab a hat-trick, as the home side took advantage of a lacklustre Liverpool performance.

For Puel, the win was pleasing but he could not avoid pondering what might have been for his team after all the wasted chances.

“It a great performance against this team but we are a little disappointed with the result considering the chances we had,” he told Sky Sports.

“It was important to win with a clean sheet ahead of the second leg at Liverpool, we had a strong, fantastic game.

I think this was the first time Liverpool had just one chance in a game.” Jurgen Klopp admitted relief that Liverpool were not beaten by more and the German feels his side are well in the tie with home advantage for the second leg.

Southampton haven’t contested a League Cup final in 38 years but, for now, Puel is not focusing on ending that long wait and he has instead challenged his squad to repeat their high intensity performance in the Premier League, where they’ve been woefully out of form recently.

“Wembley is far away at the moment,” he added. “It’s important to stay concentrated.

“This competition is exciting and it’s a pleasure but now it’s important to focus on our Premier League game with Burnley because we have lost three in a row.”