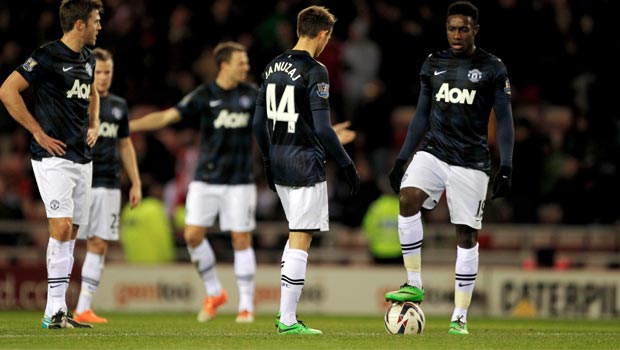 Danny Welbeck is desperate for Manchester United to bounce back after their chances of picking up silverware this season were dealt two heavy blows.

United crashed out of the FA Cup on Sunday when they were beaten 2-1 at Old Trafford by Swansea City in the third round, while their hopes of reaching the Capital One Cup final took a knock when they lost 2-1 at Sunderland in the first leg of their semi-final clash at the Stadium of Light.

Striker Welbeck is now eager for his side to bounce back when Swansea visit Old Trafford in the league this weekend, as he admits recent performances have simply not been good enough.

He told Sky Sports: “The next match is the most important. It is Swansea at Old Trafford now and we really have to get three points.

“It is up to us all on the pitch and the staff to do it. It is not the press or anyone else who are going to change this, it is ourselves.

“It is over ten years since United lost three games in a row, so we know we have to turn it around and win the next match.

“Being a Manchester lad and being a United fan, there is extra passion inside me and it does hurt me when I see the team losing. It hurts a lot to see United not winning.”

Welbeck, 23, has offered his backing to under-fire boss David Moyes and expects United to push for a top-four finish, indicating he feels the defending champions are no longer involved in the battle for the Premier League title with his side 11 points adrift of current leaders Arsenal.

He added: “I can understand why fans are concerned. We are not around the Champions League spots at the moment. We need to get our form back and just win the next matches.

“The manager is very upbeat. He lets the players know he wants to do really well and the players also want to win games for United.

“Losing three on the bounce though is really not good enough and we want to put that right.”