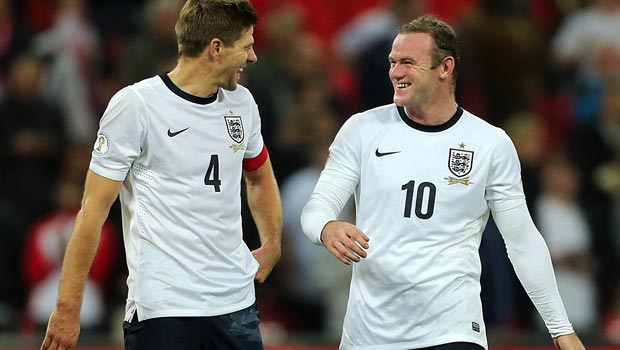 Gerrard gave up the armband following another disappointing World Cup as England crashed out in the group stages in Brazil.

Rooney was the hot favourite to replace Gerrard after also being handed the captain’s armband by Manchester United boss Louis van Gaal.

“I gave it a lot of thought but Wayne Rooney is an obvious choice for his honesty, commitment to the cause, his experience, the fact he has already captained England in the past,” Hodgson said.

“Now of course he’s got that responsibility at Manchester United as well. All those factors weighed into my thought process and I’m pleased to be able to say I’ve been able to offer it to him. I had a long conversation with him and he’s prepared to accept the pressures the England captaincy brings.

“It would be unfair to some of the other players like Joe Hart and Gary Cahill, who are experienced players in the international team and play at very, very big clubs, to say that Wayne was the only choice but I think for most people it was Wayne’s time, it was his moment and it would have been a mistake to overlook him.”

Hodgson also announced he has called up four uncapped players in his England squad for next month’s friendly against Norway and European qualifier against Switzerland.

Jack Colback, Fabian Delph, Danny Rose and Calum Chambers are all included in the 22-man squad.