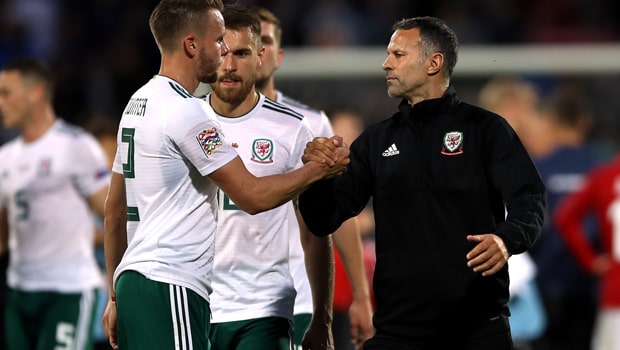 Wales boss Ryan Giggs feels he and his players will take lessons from a 2-0 UEFA Nations League loss to Denmark in Aarhus.

Tottenham’s Christian Eriksen scored both goals for the Danes, the second from a penalty that Giggs felt should not have been awarded.

The decision to award a spot kick for a handball by Chelsea teenager Ethan Ampadu was “harsh”, according to the Welsh boss.

Ampadu could hardly get out of the way of the ball as he was standing only a few yards away from Viktor Fischer when he crossed the ball, but Eriksen showed no compassion as he beat Wayne Hennessey with ease.

“Was it a penalty? It looked harsh. After that it was an uphill task against a good team,” Giggs declared.

His team had thumped Republic of Ireland 4-1 earlier in the week in Cardiff, while the Danes had no game, and Giggs felt there was a hint of tiredness as the game in Aarhus wore on. He wasn’t willing to find fault with his players’ effort however.

“They were a lot fresher. They had no game – our lads had played two games,” he added.

“It’s all about coming back. We set the standard on Thursday and it will be difficult to repeat that but that’s what I’ve challenged them to do. Overall, I can’t fault the effort. We were in the game up until the penalty call.

“All the lads are down but there are lots of positives to take. We’ll learn from it and move on.”

Ireland meanwhile are 6.00 to win Tuesday’s friendly against Poland, who are favourites at 1.57 with the draw 3.75.