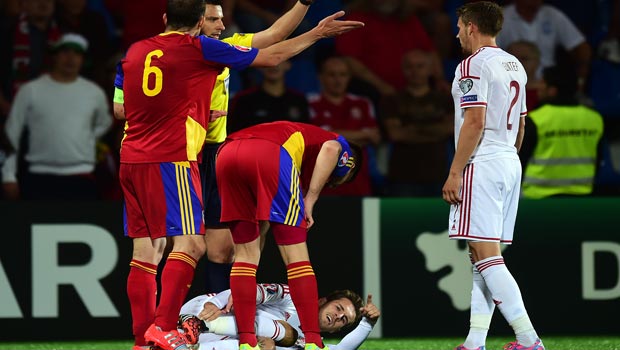 Wales boss Chris Coleman has played down the seriousness of Arsenal midfielder Aaron Ramsey’s ankle injury and hopes he will be fit for his club’s early Premier League clash at home to Manchester City on Saturday.

Ramsey had to be substituted late on in his country’s 2-1 Euro 2016 qualification win in Andorra on Tuesday evening after twisting his ankle.

Initially it looked like the 23-year-old had suffered a serious injury but he was able to get to his feet and walk to the sidelines of the controversial artificial surface at the National Stadium.

Wales struggled to get to grips with the 3G surface throughout the narrow win and the pitch may yet be blamed for the injury Ramsey suffered on the night.

Coleman is not a fan of the surface but appeared to suggest afterwards that Ramsey’s injury was nothing major, with Arsenal set to assess him ahead of their big lunchtime clash with the champions this weekend (Arsenal 2.88, City 2.44, draw 3.20).

“He got a kick and there was a twist in his ankle,” he said. “Hopefully he’ll be OK for Arsenal at the weekend but we’ll have to see what the next 24 to 48 hours hold.”

Wales needed Real Madrid star Gareth Bale to help them avoid the embarrassment of not beating minnows Andorra as the former Spurs man scored twice, including a late free-kick, to give them the win.

But the pitch has been roundly criticised with Coleman saying it is simply not suitable for such a game.

He added: “When we trained on the pitch this week, my heart sank. In my opinion the pitch is not up to the standard of a UEFA qualifier. But I don’t want to make a protest because I want other teams to come here.

“I didn’t want to say anything about the pitch before the game, but I can now, and if you’re a passing team forget it.”

Wales will hope to build on the opening victory and qualify from a group also containing Belgium, Bosnia-Herzegovina, Cyprus and Israel for the 2016 finals in France.