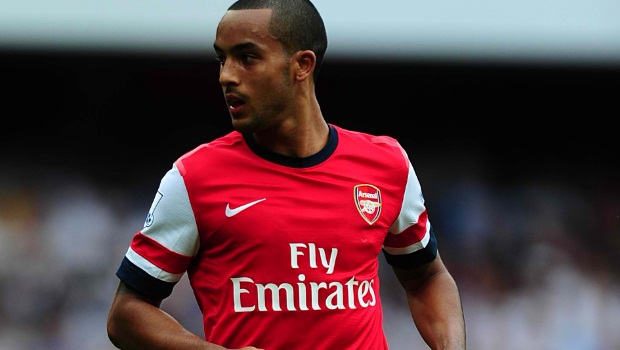 Arsenal forward Theo Walcott says he expects the Gunners to be involved in the fight for the Premier League title this season.

The north Londoners made a shocking start to the campaign when they were soundly beaten 3-1 by Aston Villa at home on the opening day.

That defeat, coupled with a lack of activity on the transfer front, prompted many to speculate Arsenal would struggle to keep up with the likes of Manchester City, Manchester United and Chelsea this season.

However, the Gunners have won six matches on the bounce in all competitions since losing to Villa and head into Sunday’s game with Stoke City in second place in the Premier League.

Fans and players alike have been boosted by the arrival of Mesut Ozil from Real Madrid for a club-record fee.

As such, spirits are high within the Arsenal camp and following a club-record 10th consecutive away victory over Marseille on Wednesday, Walcott is tipping Arsenal to end their eight-year wait for a trophy this season.

Walcott said: “I think we’ll push on and we can definitely challenge this year, for sure.

“There is so much belief in this team at the moment and I think it’s showing. We just need to make sure we get that home form going now, the away form is absolutely fantastic.

“We haven’t got the biggest squad in the world and we’ve got a lot of injuries, which doesn’t help. We’ve got to stay fit, we don’t want to lose any more players.

“As soon as the players come back there is going to be more competition for places as well, that’s only going to be a good thing for Arsenal.”

Going into the game with Stoke, Arsenal have been boosted by the news Mikel Arteta is over a thigh injury and could soon make his first appearance of the season.