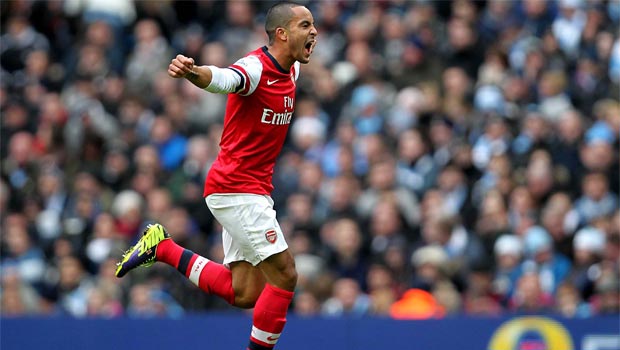 Theo Walcott says he saw signs of Arsenal’s improved defensive record during the Gunners’ 10-game unbeaten run at the end of last season in Sunday’s win over Newcastle.

Arsene Wenger’s side secured their eighth clean sheet in the Premier League in Sunday’s 1-0 win over Newcastle United and now have the joint-best defensive record in the top flight with Everton.

More importantly, the Gunners are back at the top of the table after bouncing back from their defeat at Manchester City and home draw against Chelsea with back-to-back away wins at West Ham and Newcastle.

Walcott was pleased with the resilience that Arsenal showed at St James’ Park, and feels it stems from their increased confidence at the back.

“I think you could see from the [final] 10 games last year that it was coming and that we had it in ourselves,” Walcott told Arsenal’s official website.

“It’s been two tough away matches in this period, I think a lot of people doubted that we were going to get results.”

Walcott also pinpointed the return of French centre back Laurent Koscienly after injury as a key factor in the Gunners’ solidity and praised the character being shown by all members of Wenger’s squad at the moment.

“Everyone has been absolutely solid throughout the whole year and it was nice to see Laurent [Koscielny] back today as well,” he added.

“It just shows that we’ve got great character in that dressing room and we’re getting stronger and stronger every week. Everyone trusts each other, which is so important. Going into the new year, we’re very excited.”

Aaron Ramsey, who scored twice against his former club when Arsenal beat Cardiff a month ago, is still ruled out with injury, while Mesut Ozil is also out with a shoulder injury.