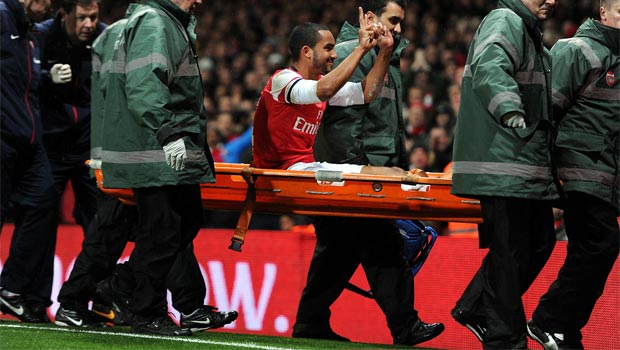 Arsene Wenger’s forward resources have been stretched further after Theo Walcott was stretchered off in Arsenal’s 2-0 FA Cup third-round win over arch rivals Tottenham on Saturday.

The England international was deployed in his favoured role as a striker against Spurs but was unable to see out the game as he was taken off with a knee injury late on.

The Gunners had already done enough to secure passage through to the fourth round thanks to goals from Santi Cazorla and Tomas Rosicky but Wenger now faces an anxious wait to discover the true extend of the damage.

Wenger said: “Theo has a knee problem, we don’t know if it is a stretched ligament or just a kick.”

Walcott’s injury comes on the back of Wenger’s confirmation that Nicklas Bendtner has been ruled out for a month.

The Denmark international sustained an ankle injury when scoring the all-important first goal in the 2-0 Premier League victory over Cardiff City on New Year’s Day, before Walcott of course added the second.

Bendtner was sent for a scan and Wenger has now revealed he is set for around four weeks on the sidelines, not great news considering Walcott’s injury, coupled with the fact that Olivier Giroud, Yaya Sanogo and Alex Oxlade-Chamberlain, amongst others, are already on the treatment table.

Lukas Podolski has recently returned to action and Giroud is expected to be fit next week but Wenger will be hopeful that the prognosis on Walcott is not too serious.

Thomas Vermaelen was also forced off against Spurs, replaced at half-time by Per Mertesacker, but the lengthening injury list may just force Wenger’s hand in the transfer window, with the Gunners already linked with a move for Diego Costa and Dimitar Berbatov.