Vokes – We have no fear on the road 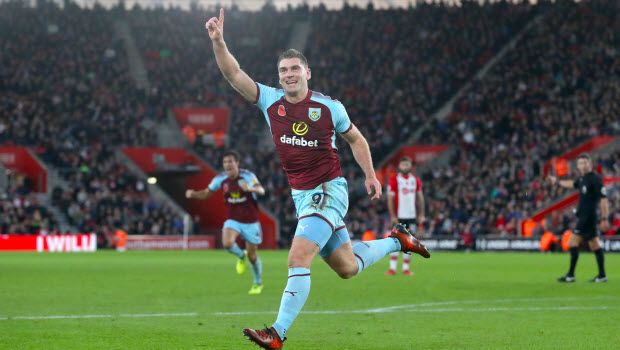 Burnley striker Sam Vokes is adamant his side have no fear when playing away from home in the Premier League this season.

Sean Dyche’s men did enough to stay up last season but their home form at Turf Moor was key to their survival.

The Clarets managed to pick up just seven points on the road last season, with just one win in what was a tough campaign.

Their home form was expected to key again this season but they have already picked up 11 points from 18 on the road.

Vokes came off the bench to score the winning goal against Southampton at St Mary’s and that allowed Dyche’s troops to climb up to seventh in the table.

Burnley started the season by winning at Stamford Bridge against Chelsea, before further victories against Everton and the Saints.

Draws against Tottenham and Liverpool have also helped them up the table and Vokes insists the squad are not scared of playing away from Lancashire.

When asked about the change in fortunes, he told reporters: “I don’t know, I suppose it’s the mentality.

“We go into games not fearing teams. It’s three wins against top Premier League sides now and it’s not just the wins, it’s the performances that go with it.

“Last year, a lot was made of our away performances and our results have picked up. We are a proper Premier League team now and you feel that every day coming into work.”

Burnley are back in action against Swansea at home on November 18, with Dyche’s men 2.05 to win. The draw is 3.30, while the Swans are available at odds of 4.00 with Dafabet.