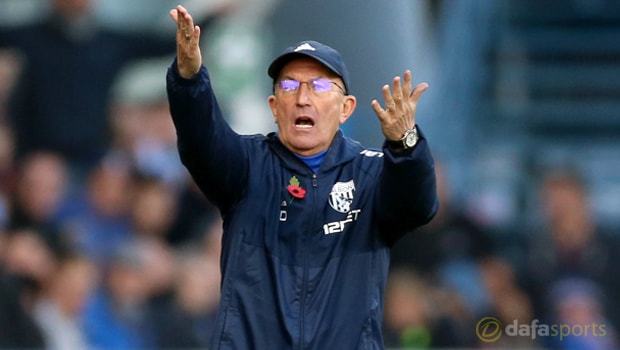 West Brom manager Tony Pulis says he accepts criticism from the fans given Albion’s recent run of form but believes the club is in a healthier position than when he took over.

Pulis was appointed to his current post in January 2015 after the board opted to part company with Alan Irvine just over six months after he had stepped into the dugout.

The Welshman guided West Brom to 12th place at the end of his first half season in charge and he has kept them away from the dangers of the bottom three in the following years.

The Baggies finished 14th in Pulis’ first full campaign at the helm and they improved on that to end 2016-17 in 10th.

However, Pulis has struggled to get consistent performances out of his troops this season, and Saturday’s 1-0 loss to newly promoted Huddersfield extended their winless run in the Premier League to nine games.

West Brom, who are priced at 3.75 to drop out of the Premier League this season, currently sit 15th and just two points clear of the relegation zone and large sections of the fans vented their frustration towards Pulis as the full time whistle went at the John Smith’s Stadium.

Pulis says he understands the frustrations but has defended his position by claiming that he has helped the club to progress over the last few years.

“I expect that [booing from the West Brom fans at the full-time whistle],” Pulis said.

“Every club, every group of supporters, if you have gone on a run like we have, and it is a poor run, will criticise.

“And the person who gets it is the manager. I am not stupid enough to think they are going to look anywhere else.

I have been at the club nearly three years now and having joined the football club, the club is in a much better position now.”