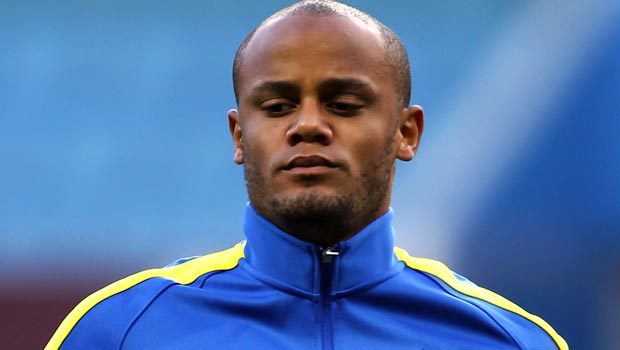 Manchester City and Belgium captain Vincent Kompany has played down fears over his fitness after limping out of the Euro 2016 qualifier with Andorra.

The defender managed 56 minutes of the Belgian’s emphatic 6-0 win over minnows Andorra on Friday night before he had to leave the field of play.

The 28-year-old struggled for fitness last term, missing chunks of the 2013/14 season to leave club side Man City, who are 21.00 to win the Champions League, short of options in defence.

City boss Manuel Pellegrini recruited Eliaquim Mangala in the summer to improve his options at the back in case Kompany had more injury issues, and will have been worried to see his captain limp off in Brussels.

With some important games for club and county to come, Kompany has moved quickly to allay fears about his fitness, claiming Belgium coach Marc Wilmots’ decision to withdraw him was a precautionary measure.

He told Belgian TV station RTBF: “All is well. Before the game I informed the coach of a few glitches. He decided to spare me and bring me off.”

Kompany could now sit out Belgium’s next Euro 2016 qualifier with Bosnia-Herzegovina on Monday, a game which could go a long way to deciding who finishes top of Group A. The Belgians are currently second in the group, behind Wales, but have played a game less.

The skipper hopes Friday’s huge win over Andorra will give the team a lift heading into Monday’s game, claiming they needed easing into the qualification campaign after a disappointing end to their World Cup in the summer.

Kompany added: “We did everything we needed to.

“In a game like this we must not underestimate the opponent. I am hoping the win will have a good impact on the goal difference.

“I am very positive and satisfied with the result and the performance of the team.”