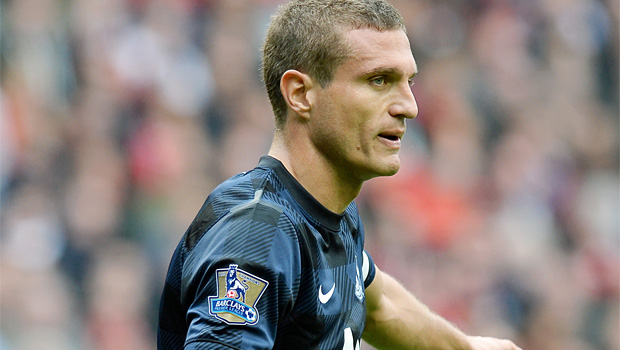 Nemanja Vidic played down concerns over a lack of goals for Manchester United, but concedes that they have to ‘improve’ on early season displays.

The defending champions have collected four points from their opening three Premier League games, with their only win coming at Swansea on the opening day.

Since the four goals they scored at the Liberty Stadium, United have failed to find the net with a goalless draw at home to Chelsea followed by a 1-0 defeat at traditional rivals Liverpool.

With Wayne Rooney currently sidelined due to a head injury, a lot of the onus for goals is placed on the shoulders of Robin van Persie, last season’s leading scorer.

But although Vidic admits it is unusual for United to draw a blank in back-to-back games, the Serbian star feels the goals will come soon.

The centre-back said: “Not scoring is not like us. But it is still the beginning of the season and we have so many games to play, some tough games.”

David Moyes pointed to a tough early fixture schedule when he joined the club, with matches against Chelsea and Liverpool in the first three games, but the skipper has seen reasons to be positive.

Vidic added: “From every game, you can take positives and negatives – even against Liverpool. I think both games (against Liverpool and Chelsea) we were really solid and we didn’t give our opponents anything.”

Following the international break, Moyes’ men entertain top-flight new boys Crystal Palace, before they then have a Champions League game at home to Bayer Leverkusen and the small matter of a Manchester derby at the Etihad on September 22.