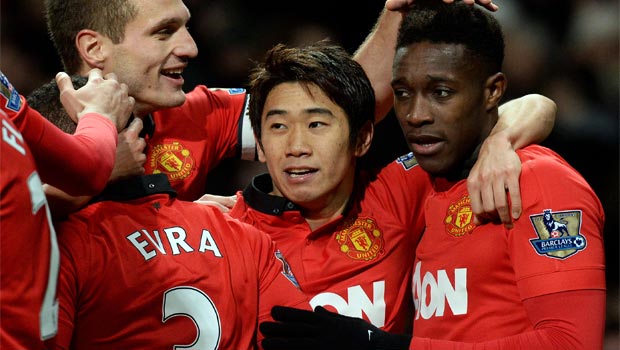 Manchester United ended their poor run of form by eventually seeing off opponents Swansea at Old Trafford on Saturday.

Defeat for Manchester United would have seen them endure their worst run of results in over 50 years, and as fate would have it, Saturday evening’s visitors were the side that had sensationally knocked them out of the FA Cup just six days earlier.

In front of 75,000 expectant supporters, the pressure was on David Moyes to get things right and win the home fans round, but during a nervous first half, chances were few and far between as Swansea did a good containing job on a side crying out for a constructive midfielder.

In the Sir Alex Ferguson era, this would have just meant delaying the habitual sacrifice of the lambs, or in this case Swans, for a few minutes longer. However, times have changed, and there were more than a few fans squirming in their seats in anticipation of a frustrating second half when just two minutes in, Antonio Valencia was on hand to drive home after a fine save by the Swansea keeper.

Finally, United had the lead, and were able to breathe even easier when Danny Welbeck stuck his leg out to deflect the ball in after 56 minutes to ensure that United did not suffer a fourth consecutive defeat.

In truth, from that point on, it could have been a massacre as chances from the likes of Chris Smalling and Shinji Kagawa were not taken, but the ghost has been laid, and United lie just off the pace in seventh despite an indifferent start.

Swansea, meanwhile, are left with bigger problems as they have only picked up three points from their last seven Premier League games and are hovering dangerously above the relegation zone.

Coach Michael Laudrup knows their next outing against Tottenham will be a difficult assignment, but will hope to get a fair share of the points on offer against the likes of Fulham, West Ham, Cardiff and Stoke.

One bright note for United was the performance of youngster Adnan Januzaj, who set up the first goal, but Moyes did not allow himself to get too carried away.

“He is not a nervous boy. He needs teaching and understanding because he is still learning the game but his natural talent and ability is up there with the best. In time he will prove that,” he said.

Moyes has his mind on the bigger picture at Old Trafford, having been promised transfer funds of over £100million to turn the Red Devils back into a side feared both home and away. The fact that they are odds against for a top-four finish truly reflects their current situation though.