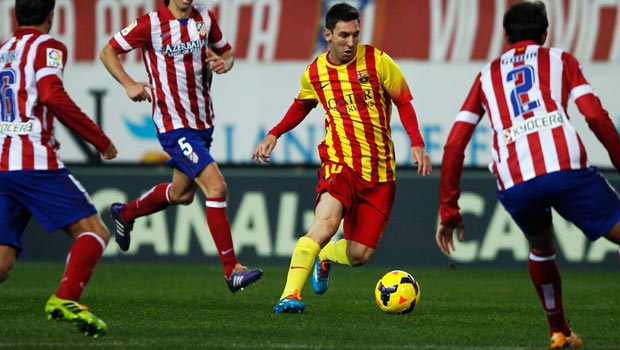 Barcelona secured a goalless draw away at Atletico Madrid on Saturday evening to ensure that they remain top of La Liga.

It is a testament to the way that Diego Simeone has turned Atletico from habitual also-rans into real title contenders that this was one of the rare occasions when Barcelona did not kick off as overwhelming favourites.

Both sides lined up with identical records this season, having each lost just once in 18 games, and much was expected from 19-goal ace Diego Costa in particular, as the home fans at the Vicente Calderon anticipated more of what they have become accustomed to.

In truth, the match never lived up to its billing as in the first half, both sides treated each other with too much respect. Lionel Messi and Neymar were amongst the substitutes, the little Argentinian in particular being nursed back to full fitness after his return from injury last week.

He was introduced in the second half as the visitors made a half-hearted attempt to turn the screw just a bit more, but the nearest he came was when he forced keeper Thibaut Courtois to save with 10 minutes left on the clock.

For the home side, Costa was well shackled, and the best chance fell to Arda Turan in the second half. However, he wasted the opportunity, and as the clock ticked down, both sides appeared more intent on not losing than going for all three points.

The 0-0 scoreline means that Barcelona remain top on goal difference, and the main winners on the night were Atletico’s neighbours, third-placed Real Madrid, who saw the two sides above them both drop points. They will hope to make ground up on the top two when they visit Espanyol this evening. Victory would take them to within three points of the two pacesetters in what is the most wide-open La Liga for years.

Meanwhile, a top four finish for Athletic Bilbao is now more than just a possibility after a 6-1 thumping of Almeria on Saturday. That win puts them four points clear of Real Sociedad, who are away to Villarreal on Monday evening.