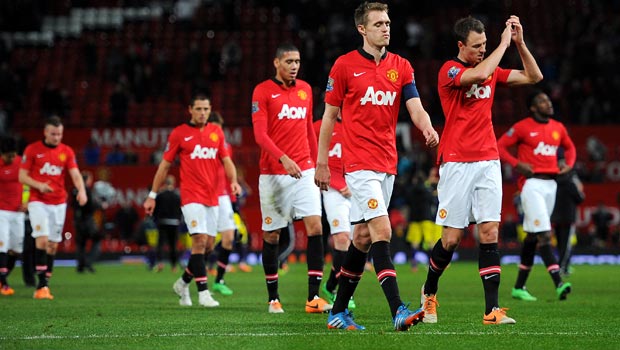 Manchester United’s poor run of form continued as they were sensationally knocked out of the FA Cup at home by Swansea on Sunday.

United started the third round tie already having lost four Premier League games at Old Trafford this season, but most fans and pundits were of the opinion that this cup game offered the chance of a release from their league woes.

However, just 12 minutes had passed when the visitors shocked the home side by going ahead through Wayne Routledge who took his chance well, lobbing confidently over the keeper.

United responded by equalizing four minutes later when Hernandez was on hand to tap in from close range, and from then on it appeared as though Swansea would be up against it.

As has often been the case this season though, David Moyes’ side failed to land the killer blow, and to make matters worse, Fabio, on as substitute for Ferdinand late on in the second half, was shown a straight red card for a high tackle.

And, as the full-time whistle approached, things went from bad to worse as Swansea delivered a sucker punch through Wilfried Bony, who made no mistake with a powerful header from close range to send the visiting fans into raptures and book a fourth-round tie with either Birmingham, Bristol Rovers or Crawley.

The defeat puts more pressure on David Moyes, whose appointment was put under scrutiny after an indifferent start to the season. A run of victories took some heat off the Scot, but this defeat will once again put his long-term tenure in doubt.

However, Moyes made no excuses when asked about Man United‘s performance.

“We are a bit unlucky to lose but we probably didn’t do enough to win it,” he said.

“We made some opportunities, not enough, and when you’re down to 10 men you want to see it out and take a replay but we didn’t quite get that far.

“We had certain periods of good control but we didn’t get a goal or create enough chances.”

With Robin van Persie and Wayne Rooney both currently sidelined, there may well be some transfer activity at Old Trafford during the January window.