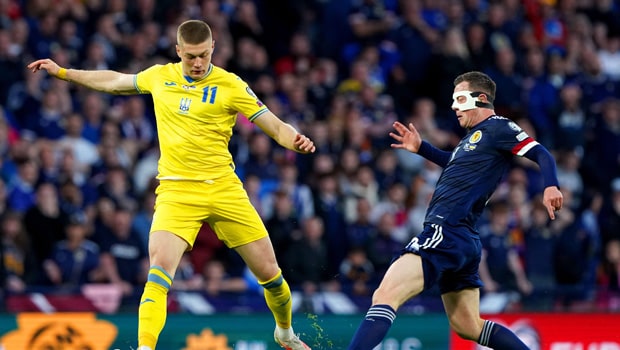 Ukraine on Wednesday night produced a rousing performance of high spirit, endeavour, and courage to stun Scotland in the 2022 World Cup qualifiers.

They have therefore earned a historic World Cup play-off final against Wales.

The Welsh side had suffered a 2-1 defeat against Poland in their UEFA Nations League encounter. Although it was a second-string side that was without top players like Gareth Bale and Aaron Ramsey, they still gave the host a run for their money.

Ukraine, a country enshrouded in trauma amid the ongoing war with Russia, shone brightly at a sun-drenched Hampden to secure the historic win.

The visitors went ahead through Andriy Yarmolenko, and further went two goals down after Roman Yaremchuk added the second.

Callum McGregor restored hope for the Scottish side with a goal in the 79th minute. After McGregor halved the deficit, Scotland looked for a late goal that would only be quashed by Artem Dovbyk, who sealed a Qatar 2022 showdown in Cardiff on Sunday with the last kick of the ball.

As the war continues in Ukraine, images of fans watching circulated; 3,500 fans bedecked in light blue and yellow – including 65 orphans invited by the Scottish FA – celebrated wildly in Glasgow after the final whistle. It is a night none will forget.

In the other game involving Wales, their second string applied themselves well in a goalless first half against a full-strength home side.

Poland were punished for their profligacy in front of goal as Piotr Zielinski and Robert Lewandowski missed chances.

After the dangerous Daniel James came closest to scoring for Wales, the visitors finally got into the lead through Jonny Williams. He scored gave the visitors an unexpected lead with a superb low strike early in the second half.

Jakub Kaminski then restored parity with a fine finish. Poland then continued the comeback through substitute Karol Swiderski who bundled in a late winning goal from close range.