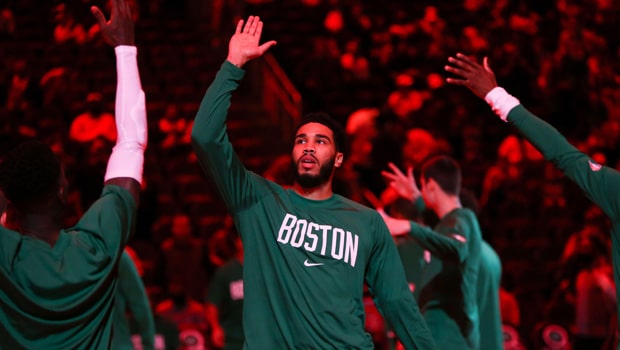 Boston Celtics star forward Jayson Tatum honored his late mentor Kobe Bryant before Game 7 of the Eastern Conference Finals against the Miami Heat on Sunday night. Tatum led the Celtics to a spot in the 2022 NBA Finals after a 100-96 road win in Game 7.

Tatum arrived to the game sporting a purple and gold sweatband with number 24 on his arm to honor the late Kobe Bryant, his friend and mentor. A screenshot on Tatum’s Instagram on Sunday night revealed that he sent a text message to Kobe’s former number just hours before Game 7

“I got you today,” Tatum wrote to Kobe. The screenshot was the last image of 10 in his Instagram post. Tatum and Kobe first met when the Celtics superstar was still a kid with a big dream and a huge fan. After his rookie year, Tatum trained with Kobe during the offseason and formed a close bond.

Jayson Tatum has credited Bryant as “the reason I started to play this game, the reason I fell in love with this game.” According to Tatum, Kobe once told him, “I didn’t have a plan B I put all my eggs in one basket and I knew I was going to make it happen.”