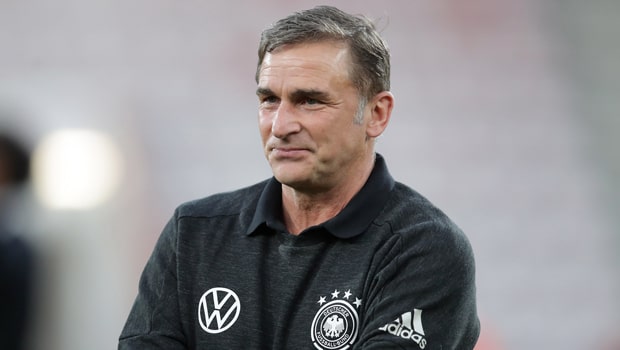 Head coach Stefan Kuntz insists his Germany under-21 side are more than just a one-man team as they prepare to face Spain in a repeat of the 2017 European Under-21 Championship final on Sunday.

Freiburg forward Luca Waldschmidt has set the tournament in Italy and San Marino alight with his goalscoring and will be looking to set a new tournament record for the defending champions when Germany’s current crop of youngsters meet their Spanish counterparts at the Stadio Friuli in Udine.

The 23-year-old has bagged seven goals so far, including a hat-trick in the group-stage victory over Norway. An eighth goal in the tournament would see him surpass Swede Marcus Berg’s record, set in 2009.

“He had a great performance, but I don’t want to single out one of my players,” said Kuntz after Germany’s 4-2 semi-final win over Romania in Bologna. “It’s the group that’s important, even those who didn’t play a minute are also important for the team spirit.”

Spain – the 1.50 favourites to lift the trophy – are seeking revenge for a narrow 1-0 defeat at the hands of Germany in Krakow two years ago.

Real Madrid midfielder Dani Ceballos, who could be moving to Serie A this summer, has been the star man for Spain as they target a record-equalling fifth trophy at this level. Spain began their campaign with defeat to Italy but cruised past France 4-1 in their semi-final.

“This team is getting better with every match,” said coach Luis de la Fuente. “I have a team that is growing, which is capable of overcoming difficult moments.

“The defeat against Italy made us stronger. I don’t think my players are yet at their maximum.”