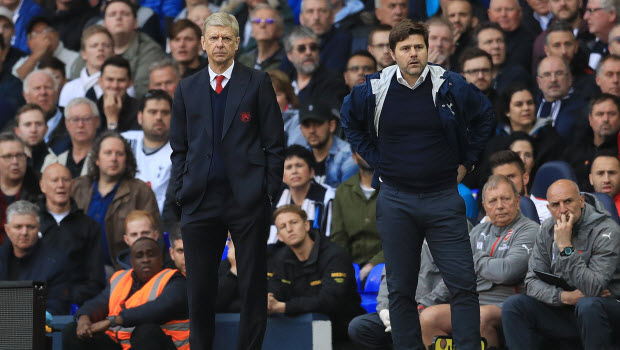 Manager Mauricio Pochettino feels Tottenham have a chance to impose some ‘psychological pressure’ on title rivals Chelsea after their win over Arsenal.

Spurs deservedly came out best in the final north London derby at White Hart Lane, with quick-fire second-half goals from Dele Alli and Harry Kane securing a 2-0 win over their fierce local rivals.

The win meant Spurs closed the gap on Chelsea to four points, the Blues having earlier recorded an impressive away win at Everton to stretch it to seven points.

The sides have just four games left and Chelsea are inching to within touching distance of a second Premier League crown in three seasons. Spurs go to West Ham this Friday with a chance to trim the gap to a single point.

Chelsea meanwhile won’t be in action until Monday when struggling Middlesbrough arrive at Stamford Bridge fresh from holding Manchester City to a 2-2 draw as they attempt to beat relegation.

According to the Spurs boss, playing first affords his side a big chance to test Chelsea’s mentality by posing them a serious question. “We are in the race and the gap is back to four points,” said Pochettino.

“We have to be focused now. We have another big game against West Ham on Friday, another difficult derby. “That could be a chance to put psychological pressure on Chelsea.

We play before them and, if we win, we will see what happens when Chelsea play Middlesbrough at Stamford Bridge on Monday.” Victory over Arsenal also ensured that Tottenham will now finish above their neighbours in the league table for the first time in 22 years.

While that is a source of tremendous joy for many of the club’s followers, Pochettino says it means much less to him. “I can understand our fans being excited about finishing above Arsenal, but I don’t feel the same because for me it is about trying to win the title,” Pochettino added.