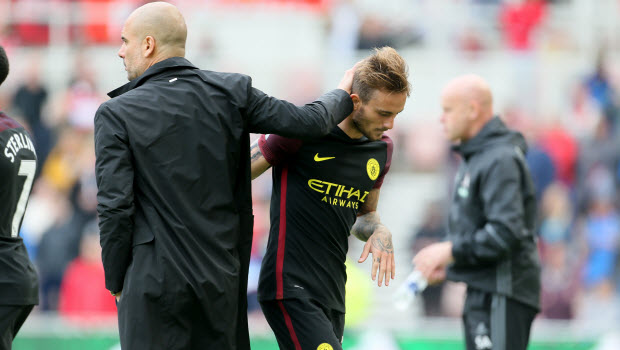 Pep Guardiola felt Manchester City had allowed another golden chance slip away in their attempts to secure a top-four finish as they drew 2-2 at Middlesbrough.

The Teesiders twice led at the Riverside, former City striker Alvaro Negredo seeing them in front at half time before Sergio Aguero levelled from the penalty spot on 69 minutes after a soft spot-kick was awarded.

Calum Chambers’ close-range strike looked set to leave City pointless but the returning Gabriel Jesus headed home from Aguero’s cross with five minutes left on the clock to ensure a point each.

With Manchester United held at home by Swansea and Arsenal beaten in the north London derby by Tottenham, the damage for City was minimal.

They are a point ahead of the Red Devils and six clear of Arsenal, who have one game in hand. Guardiola’s side are level with Liverpool on points, both having played 34 games.

City were not able to make their superiority count in a scoreless draw when Jose Mourinho’s United visited the Etihad on Thursday and, for Guardiola, a point at Middlesbrough was another chance gone begging.

He expects the race for top-four places to go to the wire. “The second half was better than the first one – we had problems trying to control their counter-attacks and we couldn’t settle,” said the City boss.

“It was tough as Middlesbrough are playing to stay in the league but we dropped another chance to take advantage. It will be tight until the last game because Manchester and Arsenal will be there.”

Jesus returned from injury sooner than had been expected and started alongside Aguero for the first time. Their budding partnership was one positive for Guardiola, who was pleased to see the Brazilian back so quickly.

“Gabriel Jesus was out for three months and made only four training sessions, but he’s 20 so he could stay on the pitch for 90 minutes and he found himself well,” said Guardiola.