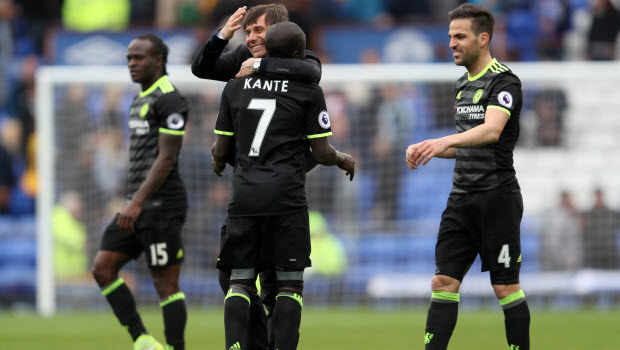 Chelsea manager Antonio Conte admits he is ‘like an animal’ on the touchline during games.

The Italian says there are two sides to his personality, that which he shows on sideline when his team are playing and the normal version away from the football pitch.

Conte celebrated wildly with his Chelsea players on Sunday at Goodison Park after they overcame Everton 3-0. The win was a giant step towards the Premier League title in Conte’s first season in English football.

Goals from Pedro, Gary Cahill and Willian leave Chelsea in need of just three more wins from four remaining games – with Everton away having looked their toughest remaining game before Sunday.

Former Juventus and Italy boss Conte talked about his antics on the sideline after the win. “There are two Antonios. Two different people,” said the 47-year-old.

“During the game, I know I am an animal. “After the game, I must be relaxed when we win but I think it’s very good to celebrate this win with the players, staff and fans. I live for this.”

Conte, who won three consecutive Serie A titles as Juventus boss between 2012 and 2014, looks destined to master England’s top flight at the first time of asking and despite Chelsea making a slow start under his guidance this season.

He feels it is important to be able to call on many traits in the pursuit of a goal like winning the league. “We must be pleased because we played a game with the head and, at this part of this season, it is important to use our head, then your heart and then your legs,” he added.

Chelsea face struggling Middlesbrough at Stamford Bridge next, a game the Blues are 1.17 to win.