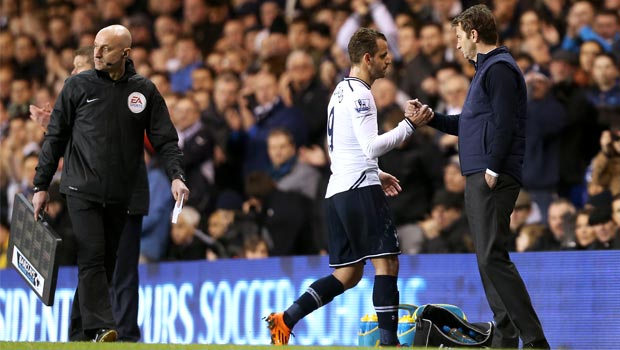 Spurs striker Roberto Soldado admits he has struggled to adapt to the Premier League but insists he will not walk away from White Hart Lane.

Soldado managed 25 goals in La Liga for Valencia last season, which prompted Tottenham to splash out £28million to sign him in the summer.

The 28-year-old has not been able to replicate that kind of form since his move to White Hart Lane and has just six Premier League goals to his name for Spurs this season.

Soldado grabbed his first goal in open play at White Hart Lane in the win over Cardiff last time out and the Spanish striker hopes he can now find the back of the net on a more consistent basis.

He told Radio Onda Cero: “It was a much-needed goal for me and especially for my team-mates and the fans.

“Despite all the time I have gone without scoring a goal, the support they have given me has been incredible.

“Every time I touch the ball I feel there is great expectation and people are hoping for the best for me – I feel wanted here even though I haven’t given them anything at the moment.”

Spurs are currently fifth in the Premier League table and Soldado is confident they can enjoy a successful season, with a top four finish and Champions League qualification high on the agenda.

Soldado is confident his form will improve and he hopes to help Spurs force their way into the top four.

He said: “I am the only one responsible for my poor form, but I will get better.

“We have a great team and I am convinced we can have a good season.”

Spurs travel to league leaders Chelsea on Saturday and are 6.22 to come away with all three points.