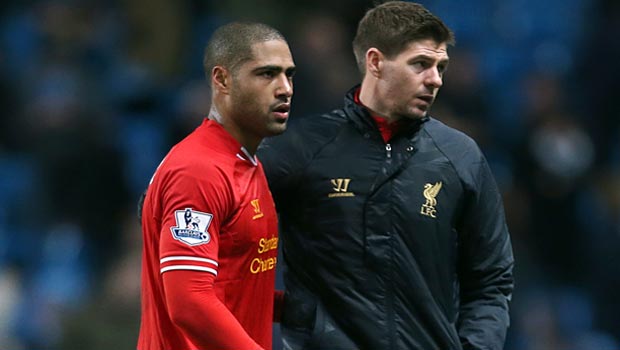 Liverpool defender Glen Johnson admits the uncertainty over his contract situation is an “unnecessary distraction” and he hopes to secure a new deal.

The England international is out of contract in the summer of 2015 and Johnson has revealed that as yet he has no discussed extending his stay with the club.

The right-back has been a regular starter for the Reds this term, but it has been suggested that club don’t want to continue paying his reported £110,000 per week wage.

Johnson has revealed he is keen to extend his stay at Anfield and feels the speculation over his future is an “unnecessary distraction” ahead of the crucial final run-in.

“I’ve loved every minute of the five years I’ve been here and I’d love to stay, but really the only truth in it is that I’ve not been offered a new contract on any level,” Johnson told the Daily Post.

“I know some people have been saying Liverpool don’t want to pay me my current wages, but I’ve not heard that. No-one has come to me from Liverpool at all.

“I don’t know the situation the club are in or if they want to renew it. So I’ve not got a decision to make other than to see my contract out because no-one is telling me any different.

“It is an unnecessary distraction. I’m more than happy to sign a new contract and I’d love to stay here for many more years.

“But at the moment that is not for me to decide because I’ve not been offered anything and I’ve not been told I’m going to be sold.

“I just have to honour my contract and try not to let it distract me.”

Johnson concedes that he was not at his best in the first half of the season but the right-back believes niggling injury problems affected his performances.

The 29-year-old was rested for around a month by manager Brendan Rodgers recently and Johnson now hopes to play a key role for Liverpool as they push for Premier League glory.

He added: “Brendan was aware of the injuries, but he was asking me to do a job for the team and every footballer wants to play.

“At first I could play with the injuries, but it got to the point where across all three it was affecting my performance and it was time to stop.

“Now I feel miles better. I’ve got that flexibility back in my ankle and I can run properly.”