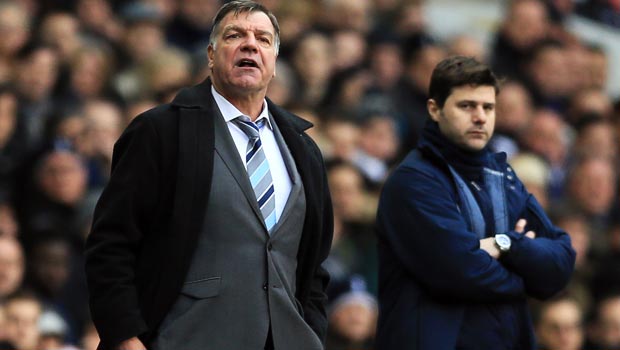 Tottenham midfielder Nabil Bentaleb has hit out at Sam Allardyce following comments the West Ham boss made in the wake of Sunday’s 2-2 draw at White Hart Lane.

The Hammers allowed a two-goal lead to slip after Cheikhou Kouyate and Diafra Sakho netted either side of half time.

West Ham had nine minutes left to hold out at the Lane but were put under pressure when Danny Rose volleyed home.

The big talking point of the match came in stoppage time when Harry Kane won his side a penalty, which he despatched from the rebound after Adrian saved the initial effort.

Allardyce felt that the penalty had been awarded wrongly and believes that Alex Song did not do enough to send Kane tumbling to the deck.

The former Blackburn and Newcastle boss accused Spurs’ players of going down easily throughout the game as his side stayed five points adrift of Tottenham in eighth.

Bentaleb, who started on Sunday, has launched a tirade back at Allardyce and told the Hammers boss to shut his mouth.

Bentaleb said: “This is football. Sometimes the referee makes decisions and you just have to shut your mouth and not complain.

“Of course it was a penalty – there’s no doubt about that. Maybe it’s because we scored from the penalty in the last minute; I can understand if he’s a little bit angry about this.

“He can say whatever he wants but if he wants to argue maybe we could say Mark Noble should have been sent off.

“The positive thing we can take out of this game is that we believed until the end and once again we scored in the last minute and managed to get that point.”

Spurs will have to improve on Sunday’s showing if they are to claim the Capital One Cup this weekend.

The north London outfit are 4.59 to beat their capital rivals Chelsea, who are 1.66 to claim the first piece of silverware of the season.