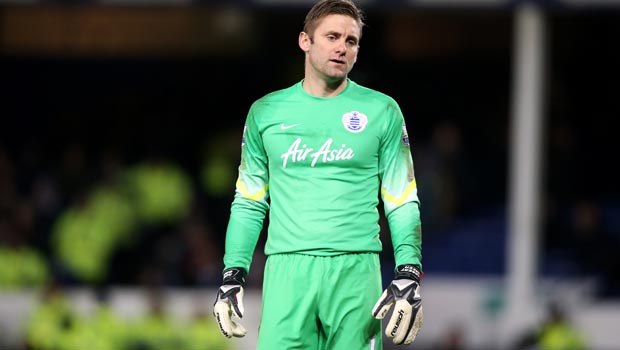 Queens Park Rangers goalkeeper Rob Green has praised his team mates for the performance they put in with 10-men in the loss to Hull on Saturday.

The R’s travelled to the KC Stadium looking to secure back-to-back victories in the league for the first time this season.

However, in a match which was billed as a relegation six-pointer, they were unable to take anything away from Humberside.

Nikica Jelavic put the Tigers ahead before Joey Barton was shown a straight red card around the half hour mark.

QPR did hit back and levelled the game through Charlie Austin before half time, but it was a late strike from Dame N’Doye, his second since joining in January, that ensured Hull would take all the points.

The Loftus Road outfit sit just outside the bottom three on goal difference as a result of the loss, but Green believes there was nothing wrong with the performance.

The former England international insists if they play like that for the remainder of the campaign it should be enough to keep their heads above water.

Green said: “It’s always disappointing to concede goals, especially at the end when you can’t respond or do anything about it.

“But we have to pick ourselves up now and get on with it.

“It’s going to be tight [down the bottom] until the end of the season.
But if we put in more performances like that, we’ll be OK.

“Everyone dug in. It was a magnificent performance to come from behind, when you’re down to 10 men that’s hard enough. Then it was a cruel blow at the end.”