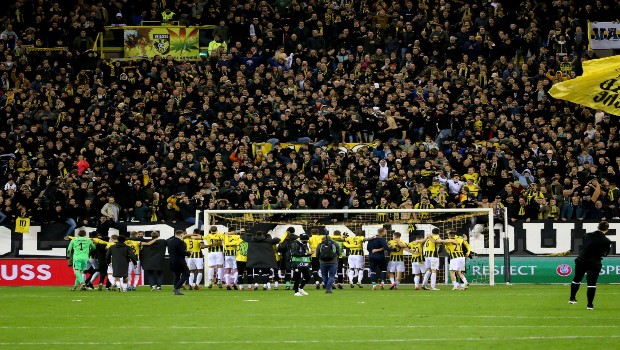 The English side fielded a largely different side from the one that beat Newcastle 3-2 in the Premier League at the St James Park.

Italian goalkeeper Perluigi Gollini returned to the starting 11 after his last appearance in the 5-1 thrashing of Mura at the White Hart Lane a fortnight ago.

Colombian defender Davison Sanchez, Joe Rodon made the defensive pairing and they were flanked Japhet Tanganga and Ben Davies.

17-year-old forward Dane Scarlett was preferred upfront as there was no Harry Kane.

However, there was experience in the midfield as Steve Bergwijn, Dele AlI, Harry Winks and Giovanni Lo Celso were joined by youngster Bryan Gil.

Nevertheless, Vitesse ended the first half with a clean sheet for the third UEFA Europa League game consecutively as they attacked the most threatening Spurs for the most of the first half.

However, Gil hit the woodwork immediately after the break but that was the closest Tottenham were to breaking the deadlock.

Vitesse continued afterwards and they were rewarded with their winning goal when 26-year-old German forward Maximilian Wittek rifled home a volley with 12 minutes left to play.

The win puts the Dutch side above Spurs with 6 points from 3 while Nuno Espirito-Santo’s team have four points in third position.

Mura remain rooted to the bottom of the table with no points after losing all three games including their latest loss to Stade Rennes.

Tottenham will play West Ham in a London derby in the Premier League at the weekend but they know better that the Hammers are in good form after their UEFA Europa League result on Thursday.

French defender Issa Diop doubled the advantage at the London stadium in the 57th minute while Jarrod Bowen made 3 two minutes later.