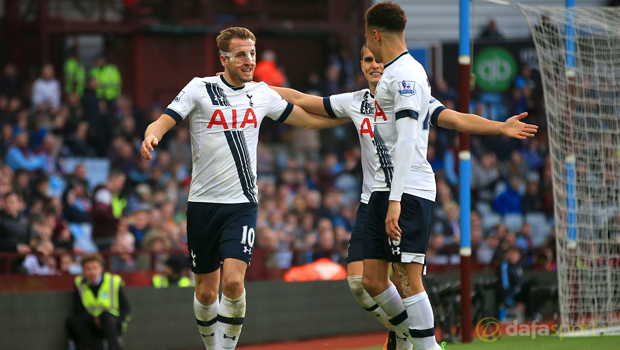 Tottenham forward Harry Kane admits he is enjoying his personal battle with Leicester’s Jamie Vardy at the top of the Premier League goalscoring charts.

The two forwards are locked together on 19 league goals apiece this season, with Kane having pulled level with his England international team-mate by scoring a brace against Aston Villa last weekend.

The goals of both players have helped propel their respective teams to the top end of the Premier League standings, with Leicester currently sitting at the top of the table, five points clear of Tottenham.

Kane admits that he is enjoying the battle to be the division’s top scorer, but insists he has not contacted Vardy about their rivalry, as both players wish to maintain a professional approach during the title run in.

He said: “It’s good fun. It’s good competition, to be up there and fighting for the golden boot.

“I’ll see him [Vardy] if we’re called up for the England squad, but I haven’t texted him or anything. We’re professional players, keeping an eye out for each other.”

Kane, who enjoyed his breakthrough campaign with Spurs last season scoring 21 Premier League goals, admits that he is pleased to have proved his doubters wrong during the current campaign, as some believed the 22-year-old would be a one-season wonder.

There was a lot of talk at the start of the season and as I’ve always said before, the top players in the world find a way to get around it and score season in, season out 20, 30 goals,” he added. “That’s what I want to be.”

Kane will be hoping to continue his goalscoring success in Spurs next league match against Bournemouth at White Hart Lane on Sunday.