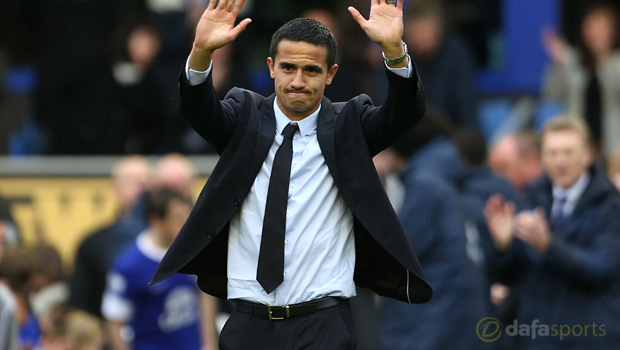 Everton legend Tim Cahill says the current Toffees team play “on a different” level compared to his time at Goodison Park and he feels they are on the verge of winning a major trophy.

Everton booked their place in the Capital One Cup semi-finals by winning 2-0 at Middlesbrough and while they face a big task against Manchester City in the last four, Cahill has heaped praise on Roberto Martinez and his players.

The Aussie ace was part of the last Everton team to reach the League Cup semi-finals in 2008 although he says the current team have raised the bar.

“I had a great time there but the football that they play is on a different level now – the way they keep the ball, the way they spray it round and also how patient they are,” said Cahill.

Now playing for Shanghai Shenhua in the Chinese Super League, Cahill says the Blues boss has been rewarded for his patience in shepherding young players into the team and also fighting to keep his stars.

“Martinez has been patient. Obviously he’s had to wait to use players – the likes of Ross Barkley. I played with Ross when he was coming through and he was one of the best young players that I’ve ever played with,” he said.

“When you keep players like that, and you give them confidence and you let them play and let them shine, obviously it comes through – and keeping (John) Stones too.”

Everton are close to making a major breakthrough, says the 35-year-old, particularly if they can provide support for star forward Romelu Lukaku.

“Lukaku, with his goals, is what the club has always needed. If someone else can step up and get his double digit goals as well it will take the team to the next level again which will probably be the silverware the club need,” added Cahill.

Everton are 6.50 to win the Capital One Cup this season while last-four opponents City are 2.25.