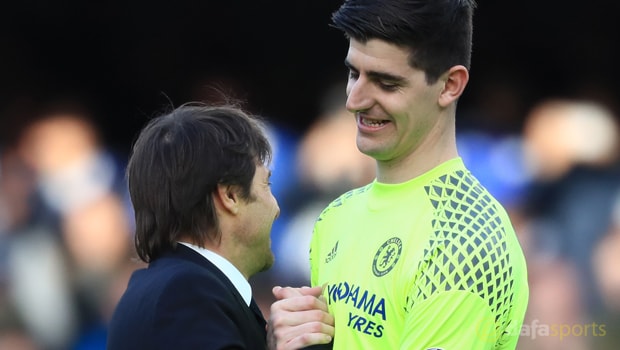 Goalkeeper Thibaut Courtois has handed Chelsea a massive boost after declaring himself happy at the English club amid reported interest from Real Madrid.

Courtois, who signed from Genk in 2011, has been number one at Stamford Bridge since the 2014/15 season and has made 83 Premier League appearances.

The Belgium international was initially loaned out to Atletico Madrid for three seasons from 2011 to 2014 and his impressive performances helped the Spanish side to La Liga, Copa del Rey, Europa League and Super Cup triumphs.

Since returning to the Blues, the 24-year-old has added a Premier League title and League Cup trophy to his CV, and he is regarded as one of the best keepers in the world.

His brilliant displays are said to have been attracting the interest of Real Madrid and the Champions League holders are rumoured to be lining up a summer move.

However, Los Blancos have suffered a huge blow in their pursuit after Courtois revealed he is happy at Chelsea and won’t be moving to the Santiago Bernabeu.

“I don’t see myself at Real Madrid,” he told Cadena Ser.

“I see myself at Chelsea, the club that six years ago saw me playing in Belgium and gave me the opportunity to sign for them.

I feel that I’m key to the team, I’m very happy at Chelsea, and I don’t see myself anywhere else.”

Chelsea are 10 points clear at the top of the Premier League and barring a huge collapse they will reclaim the title they lost to Leicester City last season.

Antonio Conte’s men return to action on April 1 when they welcome Crystal Palace to Stamford Bridge and the hosts are 1.29 favourites to make it four league wins on the bounce, a draw is priced at 5.25 while the Eagles are massive 11.00 outsiders.