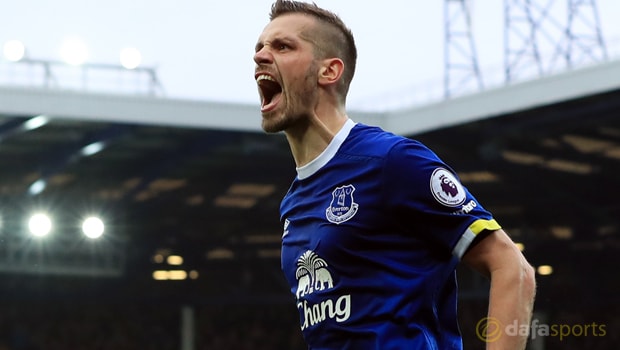 Everton may have to do without Morgan Schneiderlin for the Merseyside derby on April 1 after the club confirmed the midfielder has picked up a “minor calf injury”.

Schneiderlin was forced off on the half-hour mark in Saturday’s 4-0 thumping of relegation-threatened Hull City at Goodison Park – a result that has put Everton six points off the final Champions League position.

Former England international Gareth Barry was brought on as a replacement and he could be in line to start against rivals Liverpool after the international break.

The Toffees travel to Anfield for the early kick-off a week on Saturday and the visitors will be looking for their first win in this fixture since October 2010.

Manager Ronald Koeman will be hoping he can call upon the services of Schneiderlin, who has made a fantastic impact since arriving from Manchester United in January.

The France international has made nine Premier League appearances since making the move and six of those have ended up in victories, with just one defeat coming in the 3-2 loss to Tottenham Hotspur.

He has an impressive record in the early stages of his Everton career but the 27-year-old is facing a race against time to overcome the calf injury in time to face the club’s arch rivals.

The Toffees have confirmed they will continue to monitor Schneiderlin throughout the international break in the hope he will be back to full fitness in time for the Merseyside derby.

Liverpool, who are 1.44 to finish in the top four, have not lost against their rivals on home soil since September 1999 and the hosts are firm 1.62 favourites to clinch all three points.

The visitors, who will go into the game on the back of successive victories over West Brom and Hull, are the 5.25 outsiders to pick up the win whilst a draw is priced at 3.80.