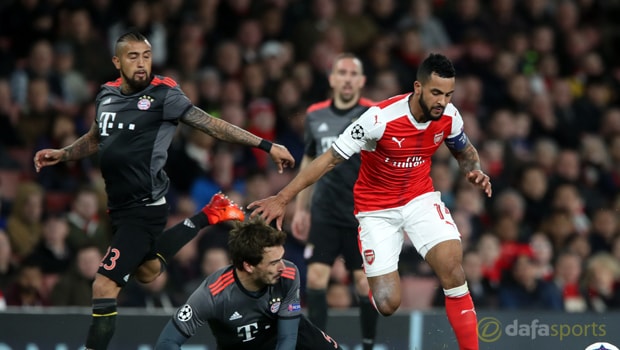 Theo Walcott says it is up to Arsenal’s players to take some pressure off under-fire manager Arsene Wenger by winning football matches.

The England international has also called for unity in the dressing room amid speculation over training ground fall-outs.

Having exited the Champions League with a 10-2 aggregate loss against Bayern Munich this week, the pressure has intensified on Wenger, who is due to fall out of contract in the summer.

Walcott admits he has no idea if Wenger will extend his stay at the Emirates but he says the squad must do its bit to help their troubled manager.

“We need to take the pressure off the manager and that will happen by performances. Who knows what the manager will do?” Walcott said when asked about Wenger’s future.

“Players just want to play football for this club and do well for the manager. The players are like everybody else – we don’t really know what’s going on.”

Arsenal have the perfect chance to put their painful European demise behind them when they welcome non-league Lincoln City in the FA Cup this weekend.

Rumours this week have suggested that Alexis Sanchez walked out of an Arsenal training session and was confronted by his team-mates Laurent Koscielny and Aaron Ramsey having done so.

Walcott did nothing to dispel the notion that all is not well at Arsenal but he has called for unity going forward.

“There are certain things that happen at training grounds…you don’t see it often at Arsenal,” he added.

“Things have happened. They need to stay in the dressing room and the players and staff need to sort it out. We are in it together here. We can’t be fighting each other.”