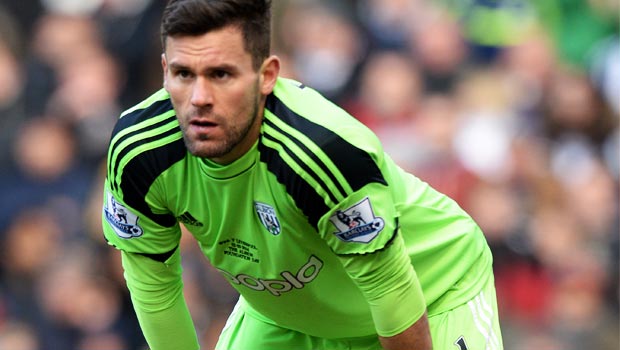 Goalkeeper Ben Foster says West Bromwich Albion must stop conceding first-half goals if they are to stay in the Premier League.

Albion, who face Swansea City at the Liberty Stadium this weekend, lost 3-0 to Manchester United last Saturday and are now only separated from the relegation places by goal difference.

Having fought back from 1-0 down four times in a row at home prior to the United defeat, Foster has urged his team-mates to avoid going behind in order to get their first win under head coach Pepe Mel.
“We’ve still come in at half-time 1-0 down and we need to stop,” he said.

“We can’t always come in at 1-0 down and then grind out a draw or a win. It’s something we need to look at.”

The England international admits the lengthening Albion injury list is a problem at this crucial stage of the season after Chris Brunt became the latest first-team star to be sidelined.
Captain Brunt has been ruled out of action for up to six weeks with a knee injury he sustained midway through the second half against Manchester United.

Defender Diego Lugano, 33, will also miss three to four weeks with medial ligament damage suffered on international duty with Uruguay, but Foster has faith in his team-mates to beat the drop.

“It’s not good really, it’s an important part of the season for us and we need as many bodies as we can,” he added.

“There’s some tough matches coming up in the next month or so, some real six-pointers that we need to take points from. But I’m confident that the lads we have that are fit and available will do a job.”