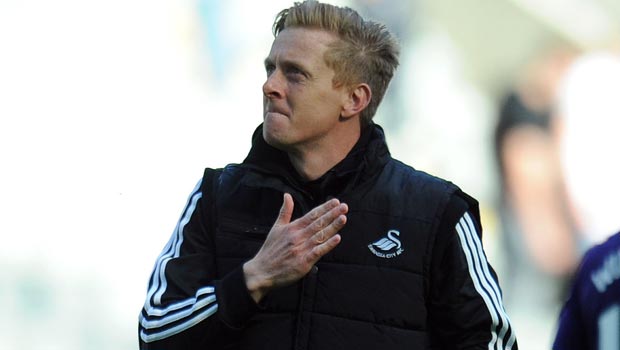 Garry Monk says he is relishing the chance to take Swansea City forward after being handed the manager’s job on a permanent basis for the next three years.

Monk, who has been the Swans’ caretaker boss since February, has steered the Liberty Stadium outfit away from relegation danger after picking up 15 points in his 13 matches in charge.

While his record of four wins, three draws and six defeats is hardly a world-beating one, Monk’s close affinity to the club – he has been there 10 years – and his dedication since taking on the role has seen him preferred by the Swansea board over more established names.

And now the former assistant coach has promised to repay the faith shown in him.

“I’ll be looking to stamp my authority on the squad and the club – and take it forward. I have a plan in my mind and with the help of the chairman and the board how to implement it,” he said.

“I have been given a massive responsibility to manage this proud football club. But I have always been a person that enjoys and relishes responsibility, so I am looking forward to the challenge.

“I have had fantastic support since I took over from my family, fans, players, staff and the board – It’s been magnificent and I really appreciate it. Now I want to repay that support and the faith they have shown in me by helping the club progress.

“I have been at this football club for 10 years and I know what Swansea City means to everyone in the community – and beyond. That’s what will drive me on to produce a successful team that plays attractive and attacking football. I want everyone connected to this club to be proud of the team.

“I am under no illusion how much hard work is needed going forward. But I am willing to put that hard work in by giving everything I have to ensure Swansea City is a success.”