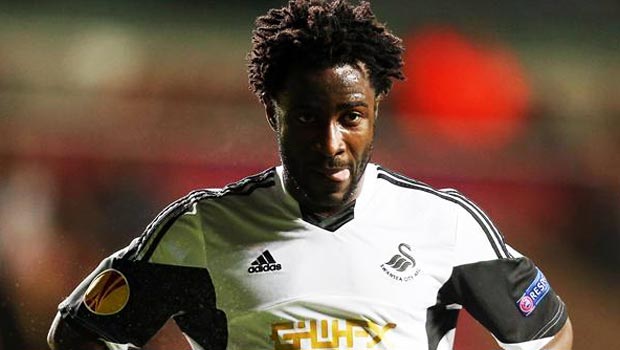 Swansea City head coach Garry Monk has pleaded with star striker Wilfried Bony to stay with the club by telling him leaving could stop him becoming a better footballer.

Bony is believed to have a £20million release clause in his contract at the Liberty Stadium and has been linked with a number of clubs this summer.

Liverpool, Arsenal and Tottenham are all believed to be monitoring the 25-year-old Ivory Coast striker, while there is interest in Europe from Bundesliga side Wolfsburg.

He scored 25 goals last season following his club record £12million signing in August 2013, an impressive return for a debut season in England.

But boss Monk has told him he can become “even better” in the upcoming season, providing he stays at Swansea.

“I’ve said all along how important Wilfried is to us and what a good player he is. For me I can help him become an even better player this season,” said Monk.

“We saw a very good Wilfried last season but with the work ethic he has and what we’re trying to do I think he can be even better this year.

“If he listens to what we’re telling him – and he does, because he’s a great guy and a great person to work with – you’ll see a better Bony.”

Swansea have already seen a number of first-team players leave this summer, including goalkeeper Michel Vorm and left-back Ben Davies, who have both joined Spurs.

The South Wales side have been busy in the market themselves with Gylfi Sigurdssn, Bafetimbi Gomis and Jefferson Montero among six new arrivals.

Swansea are 5.50 to be relegated from the Premier League next season and 21.00 to finish rock bottom. The 2013 Capital One Cup winners are 46.00 to lift the trophy again next year.