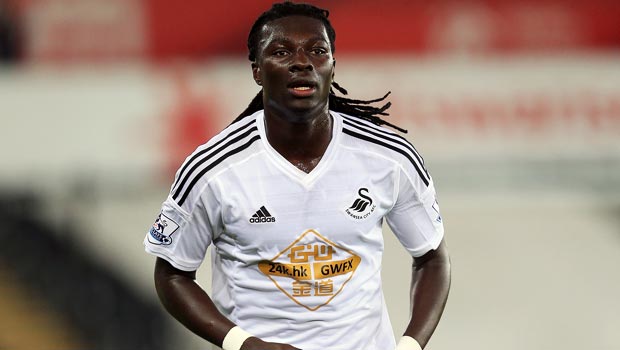 Swansea chairman Huw Jenkins is confident Bafetimbi Gomis will now settle in south Wales after a month of speculation about his future.

The France striker looked all set to cut short his time with the Swans after just six months due to a lack of playing time, with Crystal Palace and West Ham eager to snap him up.

Both clubs are said to have made offers of over £8million but Swansea were determined to keep hold, especially after Wilfried Bony left to join Manchester City.

Bony’s £28million move to the Premier League champions has given Gomis the chance to become a first-team regular with the Swans and on Monday he took to Twitter to declare his allegiance to the Welsh outfit.

With the transfer market now closed for business until the summer, Jenkins hopes the 29-year-old has the chance to settle and is hopeful that there won’t be any further speculation over the striker come the end of the season.

“I am sure he will settle here,” he is quoted as saying by the South Wales Evening Post. “He is happy living here and so are his family, and he takes on board the fact that we made a big effort and commitment to bring him here last summer.

“Yes, ideally he would like to have played more in the first half of the season, but now he has the chance to do that and I expect him to show what a good player he is.

“When we signed Gomis, we felt he would be the right type for us.

“We didn’t know how long Wilfried Bony would be with us and we took the decision to bring Gomis in.

“There were one or two bits of interest in him during the window, but you can understand that because there are not many strikers out there.

He will always stand out as a player people will look at.

“But now he has the chance to start regularly and to show everybody what he can do.”

Gomis is likely to be leading the line for the Swans again on Saturday when they face Sunderland in a game they are 1.90 to win. The Black Cats are available at 4.06 to claim the three points at the Liberty Stadium, while the draw is at 3.36.