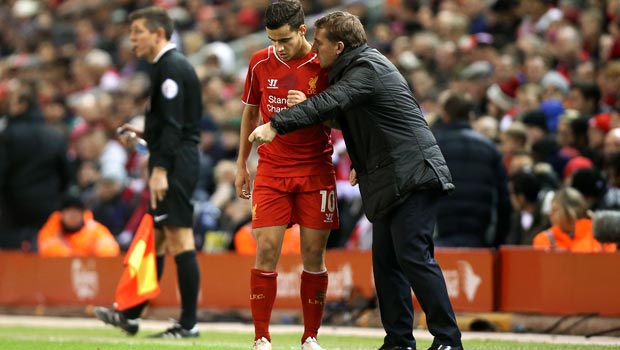 Liverpool boss Brendan Rodgers believes Philippe Coutinho will continue to improve at Anfield amid reports he has agreed terms on a new five-and-a-half-year contract.

Since arriving from Inter Milan in January 2013 the forward has developed into a mainstay in Rodgers’ side.

The 22-year-old has made the role playing just behind the striker his own on Merseyside and provided the assists for both of Liverpool’s goal in Saturday’s 2-0 win over West Ham.

Coutinho’s previous deal was set to run until 2018 but the Reds have decided to reward his rapid progress since arriving on Merseyside by offering him improved terms.

Rodgers believes that should the South American stay with the club, he can grow into a top player, admitting there are facets of his game he still needs to work on.

“Young Phil is performing at a real high level and it’s a great to see because he’s a little magician with the ball,” Rodgers said.

“The rhythm of his game is good. His courage and bravery to get on the ball is fantastic.

“If he can continue to improve – he can improve his goal-scoring ability – then he will get into that bracket of being world class.

“He has got a wonderful strike on him, inside and outside the box. It will just be about arriving in areas where he can make movements without the ball because once he is in there he has got a decent finish on him.

“His game has been about making goals but I think as he gets more experience he will understand better and there will be other players to make those final passes.

“He will be looking to improve the accuracy in his shooting. Sometimes you see him dragging the shot, but at the minute I don’t have many complaints about him.”

Rodgers went on to compare Coutinho’s role in his Liverpool side to the one Luka Modric and Toni Kroos occupy for Real Madrid, claiming both are world-class players despite poor goalscoring records.

The Reds coach will hope Coutinho can pull the strings again this weekend when his side make the short trip to Everton.