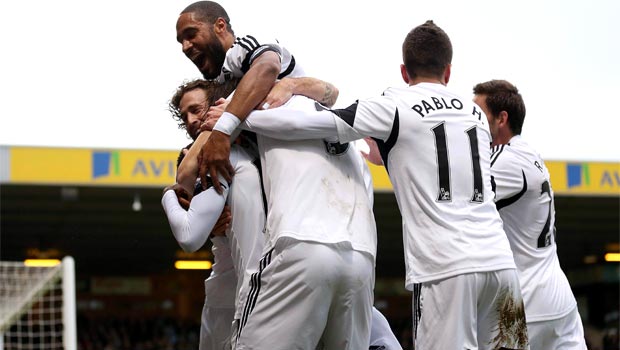 Swansea will bid to put a dent in Everton’s Champions League aspirations when they meet on Sunday.

Michael Laudrup has seen his Swansea outfit put in some unconvincing performances this season and knows they must be at their best if they are to get anything out of the contest at the Liberty Stadium.

Everton boss Roberto Martinez has done a great job since taking over at Goodison, and of course is a former Swansea boss.

He is sure to receive a warm welcome as he brings his Everton side – unbeaten in nine Premier League games – to Wales. The run includes a victory at Manchester United and a well-earned draw at Arsenal.

Laudrup has been dealt a blow with the news that star striker Michu could be out for some time with an ankle injury.

He will be badly missed but the Spanish striker hopes his side can pull things round – especially at the Liberty Stadium.

“I think to be 10th in the league and in the knockout stages of the Europa League is a good achievement for us so far,” he said.

“I think we need to start winning more games at home though. We have just two victories at the Liberty and although we have only lost two, we need to pick up more points here.

“We have the opportunity to get three points on Sunday – beating Everton would be a great Christmas present for the supporters.

“If we can win this game then we head to Chelsea on Boxing Day with good momentum.”

Everton have yet to concede a goal against Swansea in four Premier League meetings.

The home side must also do without goalkeeper Michel Vorm who recently underwent knee surgery and Gerhard Tremmel will replace him.