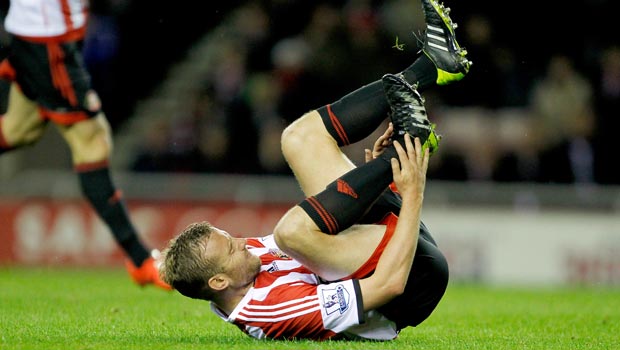 Lee Cattermole is confident that Sunderland will not be involved in a dramatic Premier League relegation battle this season having pulled off ‘The Great Escape’ last term.

The combative 26-year-old midfielder almost left the Stadium of Light 12 months ago as he battled his way back from a knee injury throughout the summer only to find himself out of the picture with then boss Paolo Di Canio.

However after the Black Cats failed to offload Cattermole ahead of the transfer window closing, Cattermole gradually forced his way back into the first-team reckoning when Gus Poyet replaced the axed Italian.

The former Middlesbrough and Wigan man played a big part in ensuring the Wearsiders stayed in the top flight despite the fact they were bottom of the table, seven points adrift of safety with just six games
– including trips to Manchester City, Chelsea and Manchester United – remaining.

Cattermole feels in good shape this time around and following the arrival of Patrick van Aanholt, Billy Jones, Costel Pantilimon and Jordi Gomez, he is in no doubt there will be no relegation fight this time but he is hoping more new faces will come in.

Cattermole told the Northern Echo: “As players we chat, we chat about the players being mentioned and what we think we might need.

“Everyone does who has an interest in Sunderland I’d imagine. We can’t affect any of that.

“If we end up going into the season with what we have now, then we have to make sure we are all pulling in the same direction.

“Lads might end up staying this year who were out on loan last time, they could have a big part to play. We have lost good players from last season as well, so we know we have to add.”