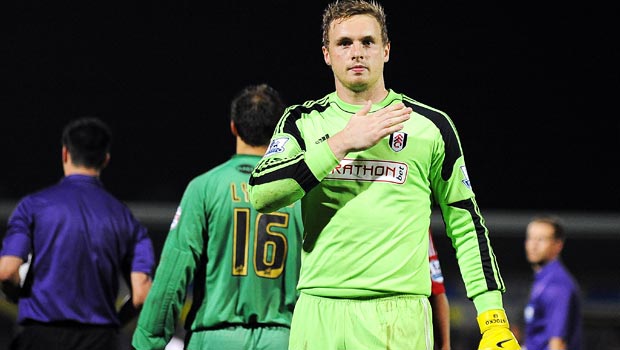 Fulham goalkeeper David Stockdale claims the club’s supporters are the main incentive for the players to try and avoid relegation from the Premier League this season.

The 28-year-old custodian enjoyed an impressive performance on Saturday as the Cottagers defeated Newcastle 1-0 to pick up their first three points since New Year’s Day and hand new boss Felix Magath his first win at the helm.

It was a rare outing for Stockdale as he was drafted between the sticks in place of Maarten Stekelenburg, but he did his chances of staying in goal for next weekend’s tough trip to title-chasing Manchester City no harm.

And while survival still appears to be a tall order for Fulham given that they remain four points adrift of safety at the foot of the Premier League with only eight games remaining, Stockdale claims the players will give it their all to avoid disappointing the fans.

The Leeds-born shot-stopper, who revealed that pictures of the fans were pinned to the dressing room walls to help inspire them going into the Newcastle clash, added in the Daily Mirror: “I took a good look around because it was a reminder of the good times we’ve had in the six years I’ve been here, and a few of us who have been at the club a while – Brede Hangeland, me, Steve Sidwell – agreed, ‘This is what we’ve got, this is who we’re playing for’.

“You don’t walk into a changing room every day and see pictures of fans staring down, but they all wear the badge with pride and we know how much Fulham means to them.

“The manager deserves credit for the pictures, and putting us through new things and schedules.

“As a certain midfielder at the club told me last week, it’s not just the badge on the front of the shirt we’re playing for at the moment – it’s the badge on the arm which says ‘Premier League’. That’s when it really hit home to me how important it is for us to stay up.”