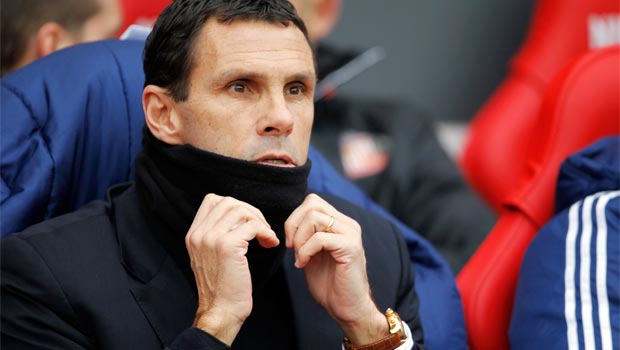 Sunderland boss Gus Poyet is expecting the relegation battle in the Premier League to continue until the final day of the season.

The Black Cats are one of 11 teams who could be relegated to the Championship, with just four points currently separating West Ham in 10th and Poyet’s side, who sit 18th on 24 points from 25 games.

They can climb out of the relegation places with a win on Wednesday night against Manchester City at the Etihad Stadium, but that of course would be a big ask, despite their recent upturn in form.

With teams still fighting for form and precious points, Poyet insists that the race to stay up will go on until the very end of the season.

The 46-year-old told the Chronicle: “It’s incredible. I think it’s going to go to the wire and I’m not just talking about us.

“I think there are six teams that are going to be fighting right to the end, to the last one or two games. The sooner we can get safe, the better, because there are contracts to sort out and players on loan.

“It’s very difficult to deal with all that when you don’t know what’s going to happen. We always say that if you go on a good run, you can get out, but if you go on a bad run, you’ll be down at the bottom again.

“I think the idea is to make sure we continue to be a difficult team to play against, like we’ve been for the last two months. Then it will be a surprise if we don’t win some games.”

Poyet’s side will get a welcome break away from the pressure of the Premier League when they entertain Southampton on Saturday in the FA Cup.

They can be backed at 3.24 to win, but Southampton come into the contest on the back of a 0-1 win over Hull and are slight favourites at 2.16.