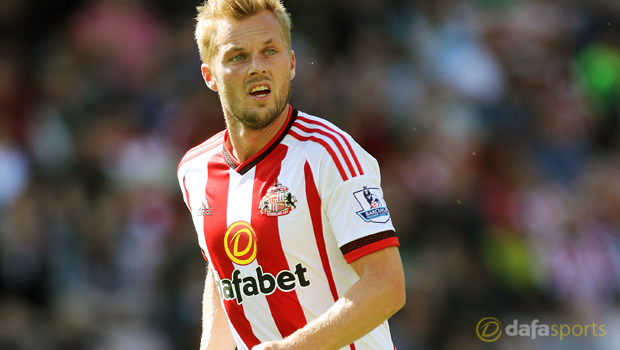 Sunderland midfielder Seb Larsson says Sunday’s Tyne-Wear derby clash with Newcastle takes on even more significance than normal given where the local rivals find themselves in the Premier League standings.

Sunderland have plummeted to the bottom of the table courtesy of Newcastle’s 6-2 demolition of Norwich City at St James’ Park on Sunday.

That was the Magpies’ first league success since Steve McClaren took over in the summer, but Sunderland remain winless, despite a battling performance in Sam Allardyce’s first game in charge against West Brom at the Hawthorns.

Allardyce felt more than aggrieved about the nature of Saido Berahino’s goal in the 1-0 win for the Baggies, in which Larsson made his first league start since August.

The Swede admits it has been tough looking on as Sunderland’s nightmare start to the season unfolded, but he is determined to stay positive.

“It has been a very frustrating time and I’ve not really had a look-in,” said Larsson. “You have to stay strong and try to stay fit so that when your chance comes you take it.”

Sunderland have won the last five league meetings with arch-rivals Newcastle and while Larsson expects Sunday to have added spice, he says they simply must produce another big performance on derby day.

“We all know what the derby means without the situation we’re in, but it obviously adds that little bit of extra spice to it. We have to win the game, it is as simple as that,” Larsson added.

Victory for Sunderland at the Stadium of Light would take them level on points with Newcastle.

The Black Cats are 2.50 to make it six successive derby wins, while Newcastle, boosted by their six-goal romp against Norwich, are 2.88 and the draw is 3.30.